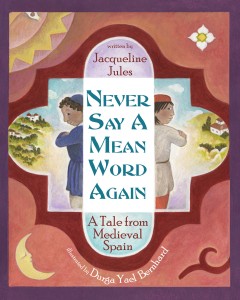 A Timely Tale
of Conflict Resolution

For the last two winters, along with shoveling snow, moving firewood, and making muffins with my daughter on snow days, I’ve been busy illustrating several new picture books.   The first, to be published this week by Wisdom Tales Press, is titled NEVER SAY A MEAN WORD AGAIN: A Tale from Medieval Spain.  It is written by Jacqueline Jules, the author of over two dozen books for children, some of which are favorites on my daughter’s bookshelf.  I was delighted to have the opportunity to collaborate with Jacqueline.

It’s always a special challenge to illustrate another author’s story.  After all, no two people think, or imagine, alike.  Fortunately, most authors are pleased to see their carefully crafted words translated into images.   I try to represent not just the facts, but also the feeling of a story.  This is especially challenging when the setting is a faraway place – and in this case, a faraway time as well.

NEVER SAY A MEAN WORD AGAIN is based on a tale that took place in Spain a thousand years ago.   In the story, a Jewish boy named Samuel, whose father is the top advisor in the royal court, stumbles into conflict with a Muslim boy named Hamza.   Though Samuel appears blameless, his father, who is considered the wisest man in the kingdom, commands his son to take responsibility for the problem. 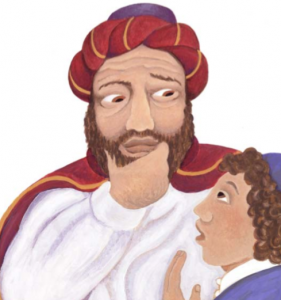 The characters of both the royal vizier and his son are based upon the historical figure of Samuel Hanagid, the highest advisor to the Muslim ruler in 11th-century Spain.

Medieval Spain was a place of rigid laws and tightly-structured forms, evident in the bold and intricate designs of vaulted ceilings and arched doorways, tablecloths and ceramics, tapestries, clothing, and illuminated manuscripts.   Beauty and precision abounded.  Yet the ornate curves of this epoch were devoid of feeling, as if the artists strove to be anonymous.   I felt a cold draft sweeping along the stone walls and dimly-lit chambers of this epoch.  There my protagonist lay awake at night in his curtained bed, trying to figure out how to stop a bully from ever saying a mean word to him again.

My special challenge with this book was to lighten up the Middle Ages, and infuse its heavy architecture with humor.  Samuel bears the consequences of his clumsiness in ways he never could have imagined.  I wanted this book to show the reader that here as everywhere, boys will be boys.  And that is their saving grace.

I began by collecting photographs of the Middle Ages.  I grouped them in folders on my computer, opened the images on my desktop, arranged them into collages, and took screen shots. 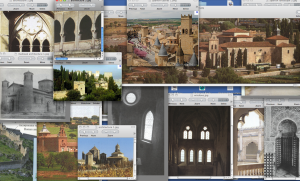 With the collages open on my computer screen, I had all the visual information I needed right in front of me.  I started sketching in pencil – first scribbling in the margins of the printed manuscript – postage stamps of trial and error, only drawing the vaguest shapes.  Later I enlarged these scribbles, and began articulating more detail. 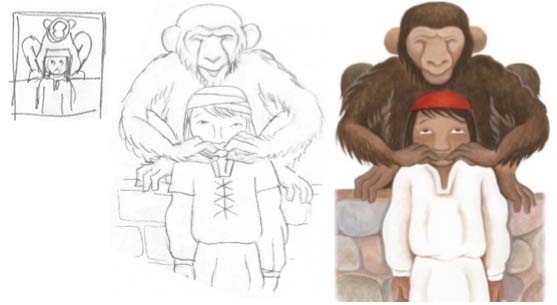 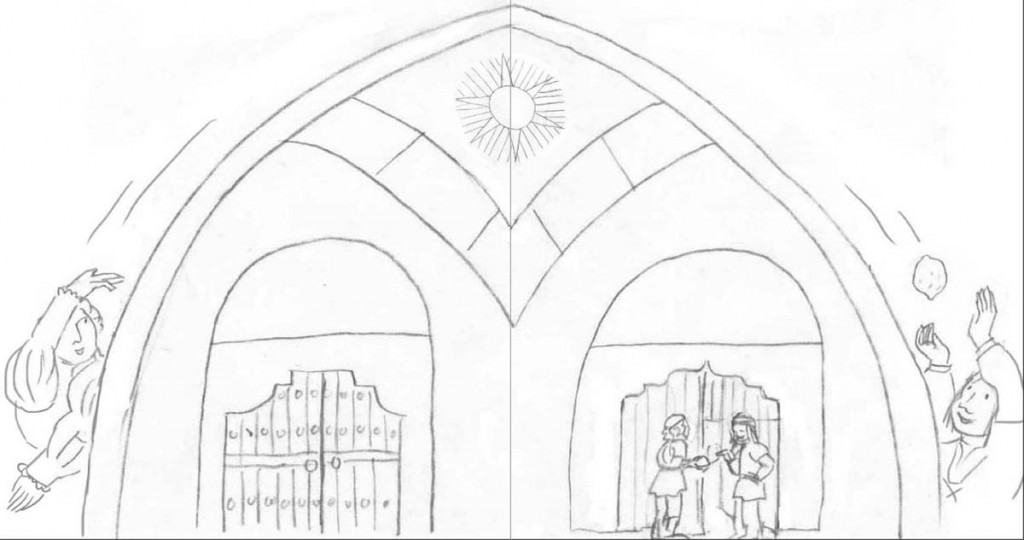 Architectural images become the structural design of a double-page spread.

Samuel is clumsy in his thinking, too, taking his father’s instructions as permission to punish the boy who bullied him with words.  But his own good nature takes over when he realizes his adversary wants a friend more than an enemy.   Before we know it, the two boys are catching frogs together. 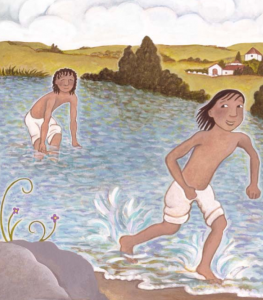 Samuel & Hamza get into a water fight.

Would that their adult counterparts could yield their grudges so easily!   Children value play over pride, and this story lovingly reminds us that we all began this way.  May every child who reads NEVER SAY A MEAN WORD AGAIN take its message to heart.   Read below for first reviews!

You can order NEVER SAY A MEAN WORD AGAIN from Amazon.com, from Wisdom Tales Press, from your local bookstore, or a signed copy directly from my webstore.   Consider donating a copy to your library!

“Inspired by a legend about a Jewish vizier who advised the Muslim ruler of medieval Spain, this story tells of a conundrum faced by a boy named Samuel and the counterintuitive wisdom of his father, the vizier. After Samuel accidentally offends Hamza, the tax collector’s son, and incurs endures his rage (“Donkey Brain! Stupid! Look what you did!”), Samuel’s father instructs him, “Make sure Hamza never says a mean word to you again.” With illuminating details—such as the boys’ headwear, backdrops of thick stone walls or heavy wooden doors, geometric patterns in mauves and browns, and a vine and flower motif—Bernhard’s (Around the World in One Shabbat) illustrations convey an elegant, multicultural castle environment. Energy and movement infuse the paintings, which humorously render Samuel’s contemplated strategies (“Maybe he could train a monkey to sit on Hamza’s shoulders. The monkey could clamp Hamza’s lips shut”). Jules’s (the Zapato Power series) down-to-earth narrative communicates Samuel’s subtle internal transformation as the unexpected, amusing, and touching outcomes of his attempts to obey his father turn a power struggle into a budding friendship.”  Ages 4–8.
Reviewed on 04/18/2014 by Tory Abel
[Publishers Weekly starred review]

“Jules has crafted a folk tale that is sure to please. She writes in a gracious and enjoyable way, with simplicity and humor.  A story of bullying, acceptance, and friendship, NEVER SAY A MEAN WORD AGAIN is a delightful account of turning meanness and rudeness into kindness and friendship.
Durga Yael Bernhard has constructed appealing illustrations, with Moorish-influenced designs. Her muted color choices and smooth designs complement the text wonderfully, calmly propelling the story forward.  The internal layout is pleasant and easy to follow, with a striking font that is easy to read, and perfectly accompanied by the illustrations.” [Foreword Reviews, May 2014]

“NEVER SAY A MEAN WORD AGAIN was a delightfully unexpected treat. When I read about the book, I was not sure how I would like it. I’m so glad I gave it a chance. The story was so deeply inspiring. What started out as an inadvertent action led to a situation of challenge that needed to be addressed. The way that Samuel handled the challenge, while at the same time trying to honor his father’s request, proved to be a beautiful lesson on what really matters above all else.
The illustrations in this book were perfectly matched to the tale written. I loved the colors and texture. My eyes were drawn to the details.”
[Kim Teamer to be posted on Goodreads]
— 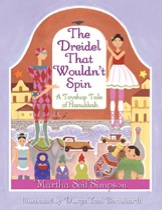 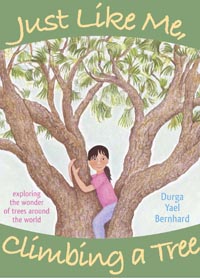