What’s in a Name?

As the illustrator and author of multicultural picture books, I find myself researching and learning about the most unexpected things.  From a Tuareg teapot in the Sahara to a griddle for making tortillas in Guatemala, cultural details must be accurate.  To my surprise, I have found names to be one of the most challenging subjects to research.  First names, that is.  Having had several nicknames in my own life, I understand how sensitive people can be to what they are called.  And as much as fashion, art, automobiles, and architecture, names reflect the time and place from which they come.

My recently published picture book AROUND THE WORLD IN ONE SHABBAT (Jewish Lights, 2011) features children from thirteen cultures around the world.  These children are all part of the Jewish Diaspora – defined by Merriam Webster as “the scattering of a people away from their ancestral homeland”.   Some of the children in my book live in places where the Jewish population is expanding; others live as tiny minorities that are vanishing from the surrounding culture.  In each case, children are named according to both local customs and traditional Hebrew names.

Turning to the internet as always, I set about my search for authentic names.  I also wanted to use names that would appeal to my readers.  Beginning with Turkey, I quickly discovered the names of famous Turkish Jews who had lived a century ago.  But if names like Esther, Bertha, Alfred, and Arthur that were popular when my parents were kids are absent from school rosters here today, how could I assume the Turkish names I found would still be used in modern Istanbul?

The short answer is that I couldn’t assume anything . . . and found myself delving further and further into each culture in order to find names that would ring true today.  In each case, I found something to confirm my choice.  Reaching a rabbi on the phone in Istanbul, I was surprised to discover the names Leyla and David are popular among contemporary Turkish Jews. “You could pick the same names that would be popular on the Upper West Side of Manhattan,” Rabbi Naftali Haleva told me in perfect English.

Next I turned to Ethiopia.  Searching the Jerusalem Post, I found an article about a young Ethiopian man named Avraham who was a medical student in Israel.  As a member of a tiny, vanishing Jewish community in his country of origin, Avraham was proud to bear the name of the first patriarch.  Likewise, the ancient name Zipporah (the wife of Moses) is still popular among the Jews of Mumbai, a small enclave that has endured in India for centuries.  Speaking to a Russian immigrant here in the U.S., I discovered the Yiddish Zayde could still be heard as a name for grandpa in St. Petersburg; and among the modern Sephardic Jews of Morocco, the name Hayyim – meaning “life” – is still used today.

As I unearthed each of these names, other cultural details were revealed which helped flesh out my characters and lend authenticity to each scene.  Finding the name Simone for the French girl in the book led me to an article about French food, and the right choice of desserts to be shown in the art.   Even the dog in my Australian scene needed the right name.  After some debate, my editor and I settled on Latka – Yiddish for “potato pancake”. According to Merriam Webster, the word comes from the original Ukrainian “oladka”, and has only been used since 1927.

The name fit the dog perfectly – but it would not have made sense a hundred years ago.

Considering the special challenge of finding authentic names, I wasn’t surprised when author and reviewer Barbara Krasner posted a review of AROUND THE WORLD IN ONE SHABBAT on her own blog, with questions about the names in the book.  She rates books according to concept, customs, tone, detail of illustrations, and authenticity.  You can read the review by clicking here.  Thank you, Barbara, for reviewing my book.  I hope I have answered your questions!

My newest picture book proposal once again challenges me in choosing an authentic name.  This is the story of a young girl growing up in rural France in the 1920s.  Researching the charming styles of children’s clothing and shoes, dolls and baby carriages, and even painted lead soldiers that were popular at the time was not so difficult.  But finding a name that would be stylish for the child of a distinguished family of that era, AND that would appeal to young readers today, is not so easy.  There are marketing considerations as well:  my first choice, Madeleine, after the middle name of the woman upon whose life the character is based, cannot be used because of the famous children’s book series by that name.  My second choice, Marie Claire, after my friend and colleague who inspired the book to begin with, would never have been used in the 1920s, I was told.

There’s no lack of internet sites that sport all the baby names under the sun, and their origins.  And there is no lack of etymological resources.  But finding the right names is another matter, and goes beyond the internet.  As with any nuance of language or art, there’s no formula for finding the right answers, and no substitute for talking to people.  That’s one of the many challenges of writing and illustrating children’s books . . . and one which this author and illustrator finds enriching.

Speaking of rich, that’s a chocolate eclair and a lemon tart shown in the illustration.  A hundred years ago, Simone and Maurice would have had different names, and probably would have been eating different desserts.  But for now, they seem happy, and so am I. 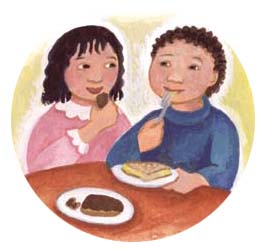 To order AROUND THE WORLD IN ONE SHABBAT, please click here, or visit my webstore. 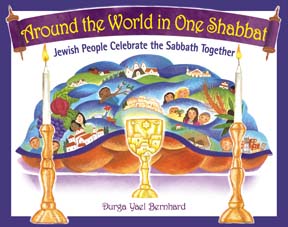 2 Responses to What’s in a Name?