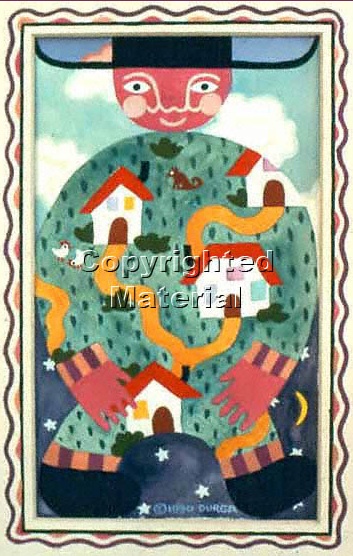 Village Man was my first children’s illustration.  It was not published in a book, but matted and hung in a child’s bedroom.  My son was two years old at the time, and my second child was on the way.  I was just starting out as an illustrator, and aspired to do children’s books, so I thought – why not practice illustrating for children while also decorating my children’s bedrooms?

The result was a whole series of prototypes – whimsical gouache paintings titled, as a series, “Bright Spirit”.  Village Man was the first.  Hand-painted borders on the mats added to the charm, and soon I was selling them through a local giftshop, The Sweetheart Gallery in Woodstock, NY.  I sold dozens of these paintings, many of them the same design, but each one painted in a slightly different way.  My figures were multiracial – often with green or purple skin – and dressed in fanciful ways.  I contrasted washy, transparent areas – such as the man’s body and the sky – with solid, opaque areas – such as his hat, face, hands, and shoes.

Village Man was followed by other children’s paintings, such as Mountain Woman, River of Laughter, and Kiddie Totem.  I shot 35mm slides of these paintings before I sold them, and soon I had a portfolio of children’s art.

At the time, I was studying Jungian dream analysis with a mentor and Jungian analyist in Rye, NY – my dear octogenarian friend Winifred.  One day I brought her a dream that she could not understand, and she referred me to her mentor:  accomplished Jungian analyst and author Jan Perkins.  To better understand my dream, Jan asked to see my artwork.  When I showed him my “Bright Spirit” slides, he offered to put me in touch with his wife, who was then the editor-in-chief at Holiday House Publishing in NY.  Holiday House is one of the last independent children’s book publishers, owned by Kate & John Briggs, who encompass in their books the kind of values I wanted to teach my own kids.  I was proud to join their team of authors and illustrators.

My first picture book, What’s Maggie Up To?, published a year later as my second child was born, was based on one of my “Bright Spirit” paintings.  I painted the art with my newborn daughter nursing in my lap.  Ten more books with Holiday House followed – eight of them written by Emery Bernhard, my ex-husband – before we branched out to work with other publishers.  I remember those books fondly.

Order Village Man as a POSTER this week, and get a free greeting card (of the same image)!   $10 for the poster and card, shipping included.  Order your poster here!

D Yael Bernhard
http://dyaelbernhard.com
Author / Illustrator of
JUST LIKE ME, CLIMBING A TREE: Exploring Trees Around the World – new!!
THE JEWISH EYE 5776/2015 – calendar of art – new!
NEVER SAY A MEAN WORD AGAIN – A Publisher’s Weekly Starred Review;
winner of the Sydney Taylor Award and National Jewish Book Council Award
THE DREIDEL THAT WOULDN’T SPIN – A Toyshop Tale of Hanukkah
WHILE YOU ARE SLEEPING – A Children’s Book Council Notable Book
AROUND THE WORLD IN ONE SHABBAT – A Sydney Taylor Honor Book
GREEN BIBLE STORIES FOR CHILDREN – Nat’l Green Book Festival Notable Book
A RIDE ON MOTHER’S BACK – An American Bookseller Assoc. Pick of the List
– and more!
This entry was posted in Children's Books, D Yael Writes About Art, Image of the Week, misc and tagged Bright Spirit, children's art, Durga Yael Bernhard, gouache paintings, Village Man. Bookmark the permalink.