From Thread to Weaving 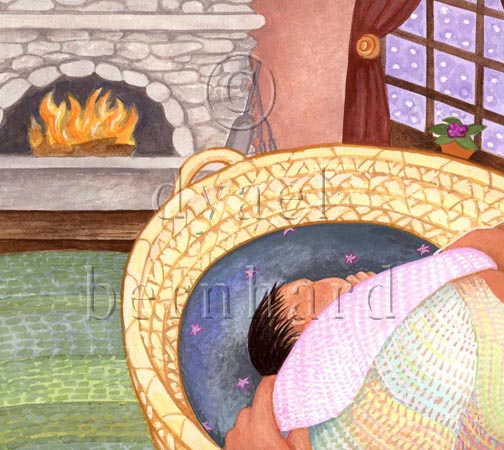 This illustration is from my 2006 picture book In the Fiddle Is a Song: A Lift-the-Flap Book of Hidden Potential.  I painted this picture on a day just like today – April snow, morning fire, fluffy snowflakes.  My model, of course, is my daughter Sage – or rather a photograph of her, as she was already five years old when I illustrated this book. Isn’t she cute? (okay, I’m biased) – she looked like a little papoose.  Yes, she did sleep in a basket as an infant, just like this one.  The fireplace is taken from her father’s rustic cabin up on the mountain an hour from my house.  Sage has grown up in the beautiful forested wilderness and rural culture of the Catskill mountains.

The text reads: “In the thread  . . . is a weaving . . . waiting to be spun”  – referring to the hidden potential in the yarn, or rather thread, from which the baby blanket is woven.  The image you see above is what is revealed when the flap for this page is open.  Here’s the page with the flap closed, then open: 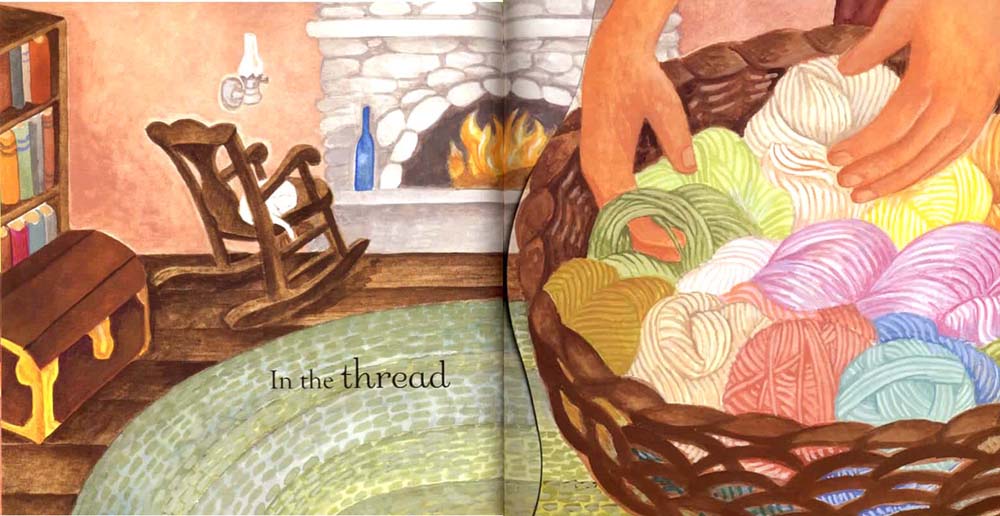 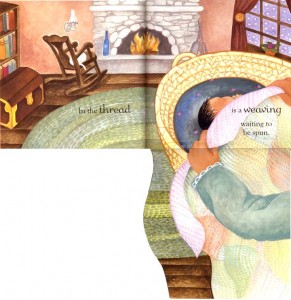 Sage had a woven baby blanket just like this one.  I don’t always weave my own personal life into the books I make.  But in this case, the whole idea for the book came from a basket of yarn, parked in the mudroom of a friend’s house. Like me, my friend was a single mom; one day, when I brought my daughter to play with her son, I saw the beautifully colored yarn in the basket by her door.  “Do you knit?” I asked her.  “No,” said my friend, “but I keep the yarn there just to remind myself of the potential.  Someday I’ll have time to take up knitting again.”

From there the book developed, as I began to notice all different kinds of potential that people see in everything from a lump of clay to a field of wheat – and the potential in nature, ranging from a pregnant storm cloud to a ripening plum.  When presenting this book in classrooms, I ask my young readers:  How is natural creation like human creativity?  How is it different?

When it came to depicting human creativity, with my child growing up in an increasingly-technological world, I focused on hands-on activities: weaving, sculpting, playing a violin. But the greatest potential that I want to make known to young readers is the potential of their own minds, their own future lives. Thus the book ends with “In you . . . is a story . . . waiting to be told.”

In the Fiddle Is a Song is out of print, but you can get a used copy on Amazon for a dollar plus shipping.  I get so much positive response to this book!  Many a music teacher has tried to order it for their students – in one case, for an entire music school.  The book was originally published by Chronicle Books in San Francisco.

Wishing you a good week and a happy spring!

Author / Illustrator of
THE HUNGRY HAGGADAH: A Passover Story in Rhyme
JUST LIKE ME, CLIMBING A TREE: Exploring Trees Around the World
THE JEWISH EYE 5776/2015 – calendar of art