The Tale of Jumping Mouse 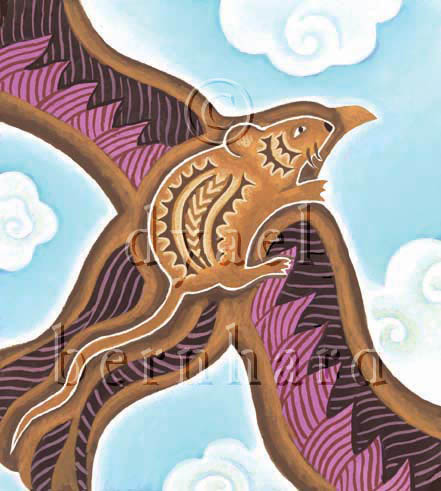 Following last week’s image of Coyote Rides the Sun, here is the companion story that I illustrated along with it for “A Child’s World”:  The Tale of Jumping Mouse.

This is a charming Native American story of the northern plains.  In the story, Jumping Mouse is so selfless that he sacrifices his eyes as special medicine to heal first a bison and then a wolf.  Though both these creatures could easily trample or kill Jumping Mouse, he feels for their plight.  But having given up his sight, he realizes his own life is in danger.  The Creator sends a magic frog, who counsels Jumping Mouse to take a leap of faith and jump high into the air.  Jumping Mouse does so, and instantly becomes an eagle.  That is the image you see here, which was painted for the cover and also used at the end of the story.

Shamanic tales abound among the Native Americans of the plains, in which animal spirits transform according to the laws of justice by which these tribal peoples lived their lives.  While we cannot go backwards and live as they did (and to some degree still do), their earth-centered societies have much to teach us, and their folklore is easily retold for children.  “A Child’s World” did a great job in designing this set of books, and I was proud to be the illustrator.

Order Jumping Mouse as a POSTER this week, and get a free greeting card (of the same image)!   $10 for the poster and card, shipping included.  Order your poster here.  Your can also order a six-pack of cards for $15.  Order greeting cards by filling in the title here.

A good week to all,