In honor of Passover, the ancient Jewish holiday that celebrates liberation from slavery, I chose this image of a slave ship for this week.  These illustrations were commissioned several years ago by Core Knowledge, a publisher of educational textbooks.  I was given a half a dozen images to do on the history of slavery in America.

This is not a pretty picture, no pun intended.  How do you depict something so horrific  for young readers?  On the one hand, publishers and teachers want students to be educated.  On the other hand, the horrors of history can be too much for tender young minds to bear.  Where do you draw the line?

I was fortunate to have a child of my own who was around the same age as my targeted readers at the time.  I let that be my guide: how much would I want my ten-year-old daughter to see?  It’s hard enough to take her to a zoo, where she sees animals suffering even in a relatively humane sort of captivity.  To see people being treated like something less than animals, enslaved in utter cruelty – I could not bear to do more than hint at the extent of it.  My publisher agreed.  This was only meant to be an introduction to a complex historical subject. 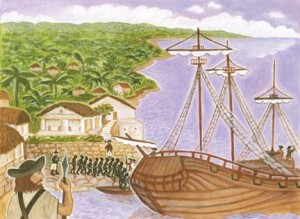 Our nation was built on both liberation and slavery.  The same colonists who sought liberation from religious persecution and oppressive monarchies, built their fortunes in the New World on the sweat and toil of African slaves.  It’s easy to look back now and condemn the cruel traders who captured the slaves and loaded them like cargo onto their ships, then sold them for profit in America into lives of misery.  At great cost, slavery was finally abolished, but the prejudices that gave rise to it still exist in our society.  The question to ask on Passover is what enslaves us today?  How do we strive to control others?  What power-hungry leader, what profit-driven master lords over our lives?  What false beliefs hold us captive?

These questions are worth pondering, year after year – and worth expressing in art.  I feel honored to portray history for children.  This assignment was both challenging and rewarding.

I’m working on another history book for children now: The Life of An Olive, about a 2000-year-old olive tree in the Galilee.  It will be published this fall by Heliotrope Books.

Chag Sameach – Happy Passover – to all my Jewish friends.