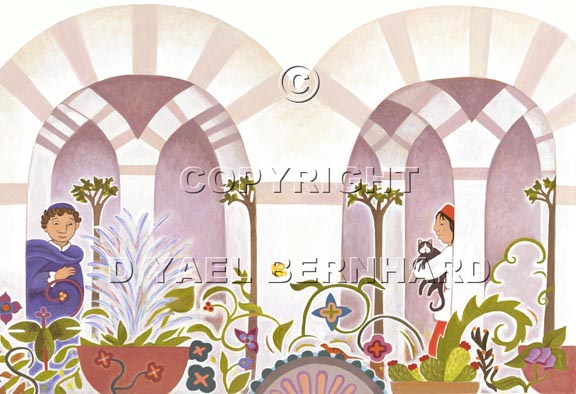 This illustration does not have a title.  It’s the opening scene of my recently-illustrated  picture book Never Say a Mean Word Again (written by Jacqueline Jules, published by Wisdom Tales Press in 2014).  This unique tale from medieval Spain begins with two boys who literally stumble into each other in the royal courtyard.  It appears to be Samuel’s fault: he’s so entranced by the flowers and fountains, he walks straight into Hamza.  But Hamza’s angry response is worse than Samuel’s clumsiness, resulting in a conundrum as Samuel’s father , the top royal advisor, challenges his son to resolve the conflict himself.  “See to it that Hamza never says a mean word to you again,” orders the vizier.

What’s a young boy to do?  Whether last week or a thousand years ago, there’s nothing new about power struggles.  Samuel’s clumsiness continues as he tries to punish his childish adversary – only to discover that what Hamza wants most of all is a friend.  If only adults could let go of their grudges so easily!  This book has won seven awards for its message of conflict resolution.

Before I began sketching the illustrations, I immersed myself in the culture and imagery of medieval Spain.  Western art was expanding rapidly at the time, even as it was  repressed by the Catholic Church.  The iconography of the era was both religious and decorative, with many stylized interpretations of the Bible.  Geometric borders and shapes offered more ideas for ornamentation than I could possibly use.  Some of these decorative elements are incorporated into the royal courtyard, with its many exotic plants.  What fun!  I put botanical accuracy aside and focused on the architecture of the image.  I wanted a kaleidoscopic opening spread that would engage young readers right away.

For the two main characters, I chose two colors for their clothing that were common in medieval art: orange and blue.  The blue was a natural choice for the Jewish child’s garb; while the orange of the Muslim boy created visual tension (orange and blue are opposites on the color wheel).  For anatomical reference, I used a few photos of my daughter and her friend playing in the stream near my house.  They were the right age, at the time, for my storybook characters. 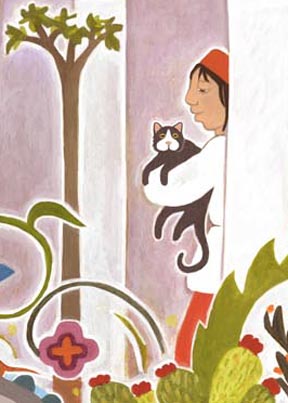 Never Say a Mean Word Again is available at school and public libraries; through my webstore, where you can order a signed copy; or through the author’s site or the publisher’s site.  It’s also on Amazon, and for local shoppers, at The Tender Land Home in Phoenicia, NY.

Awards and Honors for Never Say A Mean Word Again:

Foreword Reviews Book of the Year 2014, Finalist in the “Picture Book” Category 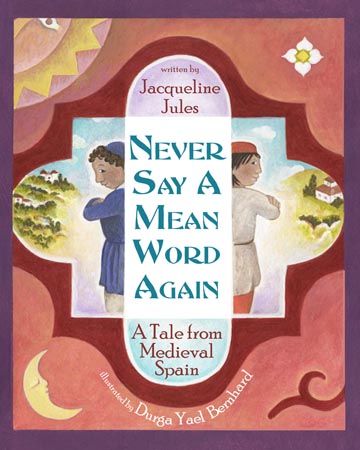