Back in 2004, I was commissioned to design this logo for The Religious Coalition for Reproductive Choice.  Just a few weeks ago, I “ran into” my old contact there, Barbara, while commenting on a friend’s trip abroad on FB.  Apparently Barbara and I have a friend in common!  This coincidence inspired me to write about the image.

RCRC is an unusual organization.  They are “pro-faith, pro-family, and pro-choice” – three values that do not always find themselves under the same roof.  Not only does RCRC stand in support of sex education and women’s freedom to determine their own lives and the lives of their children, but they are dedicated to busting false or outdated ideas about what religious leaders really advocate in today’s world.  We should not assume what is believed – and what is quietly supported when an individual woman must make a difficult choice.

I was chosen for this assignment because of my reputation as a multicultural illustrator.  RCRC wanted an image that represents all religions, all nations, all walks of life.  A massive march on Washington was forthcoming, and they wanted to print a bold and colorful t-shirt, as well as use the logo in other venues in print and on the web.

Immediately an idea of intersecting rivers came to mind – four rivers of humanity, mothers and babies and families of every race coming from the four cardinal directions – like a mandala, or a Buddhist “dorji” – a symbol of the foundation of the physical world that I really liked at the time.  Between these four rivers are cities and suburbs, mountains and beaches.  Where the rivers converge, a mother, child, and baby fill the center of the logo. 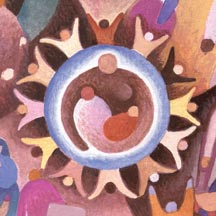 All these tiny figures took time and patience to paint.  But the real challenge was making so many elements harmonize into an image that was simple and visually readable.  On my website, I titled the logo “Four Corners”.

Order Four Corners as a POSTER this week, and get a free greeting card (of the same image)!   $10 for the poster and card, shipping included.  Order your poster here!

Author / Illustrator of
JUST LIKE ME, CLIMBING A TREE: Exploring Trees Around the World
THE JEWISH EYE 5776/2015 – calendar of art

One Response to Reproductive Justice