My Journey into the Labyrinth of Educational Research 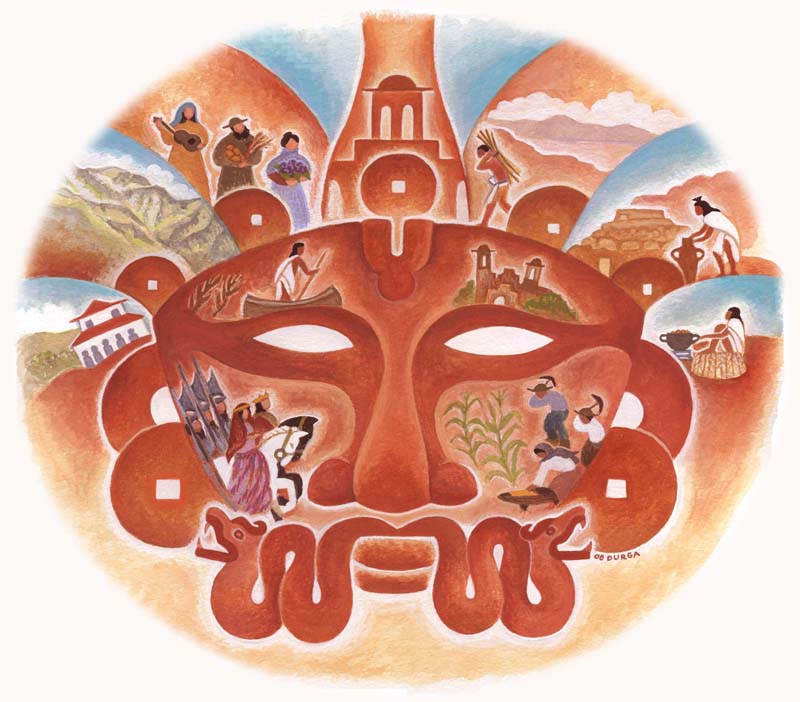 How active should an artist be in shaping the content of a book?  Whether working in the educational or retail industry, illustrators are hired to serve publishers, while publishers work to please their buyers, and ultimately, their readers.  To whatever extent possible, I want to serve all three – publishers, buyers, and readers – as well as those who are represented in the work I do.  To do that, I must research my subjects carefully.

Visual accuracy is a matter of professionalism.  But merely conveying facts may not always serve a publisher’s needs.  Some publishers provide pre-printed guidelines for artists that dictate what is safe to show in a book, and what is not.  An illustration showing children playing on a dock, for example, may be required to include life jackets and show proper adult supervision, keeping the publisher afloat in a world of rampant litigation.  Unless necessary to the plot, characters must be visually shielded from hazards.  Poverty must be depicted in a way that is not depressing, not so much to avoid the truth as to eliminate distractions.  Joseph Schindelman accomplished this with both humor and grit in his pen & ink illustrations for the original 1964 edition of Charlie & the Chocolate Factory.  What could be more cheerful than his depiction of the grandparents’ bed in the famous family hovel from which Charlie’s adventure begins? 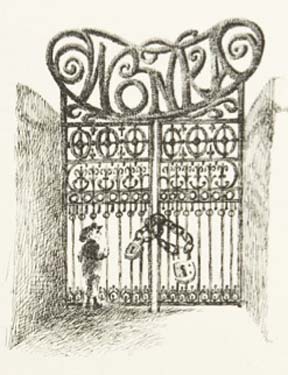 Researching multicultural subjects can be even trickier.  I tread carefully as I set foot in each culture, searching for clues to what makes each one unique.  Whether it is a folk tale or a biography, a book should represent its subject as authentically as possible.  Or should it?

One of my first educational assignments was a story of a contemporary Zuni Indian girl, the daughter of a traditional potter.   In one “illo”, I was instructed to show a middle-aged native American woman loading a clay pot into a kiln.  But my research quickly revealed that southwest native American potters do not have kilns, often for economic reasons. Instead, they build layers of burnable and non-burnable trash, creating an oven-like tent of flattened beer and soda cans.  The clay pot is then buried under this smouldering, rusty debris – and the skilled potter, rather than setting a dial, tends to the firing process with a stick.  I sent an email to the editors: did they want me to show this innovative firing technique?

The reply came promptly, with instructions to crop the source of the fire out and show the top of the flames only.  I also received special thanks for checking cultural facts.  But my marching orders did not sit well with me.  Was the omission of the true “kiln” misleading?   The reader was likely to gain the impression that Zuni pottery could be fired much as a marshmallow is toasted.  I wanted my illustrations to be authentic.

But as my editor reminded me, the subject of the book was not pottery, but Level 2 vocabulary words.  The particulars of the potter’s craft did not matter here.  Engaging the reader did.  The targeted age group and subject of the book determined the level of accuracy needed. 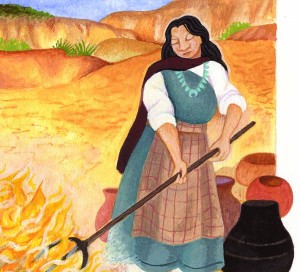 Not long after the Zuni assignment, I was given a tale to illustrate about a young Inuit being initiated as a hunter.  I was instructed to show father and son creeping silently, harpoons raised high above their heads, toward a distant walrus sleeping on the Arctic ice.  But living in a rural area where hunting is popular, I knew no hunter who would raise his weapon while approaching prey; instead, he would tuck the spear under his arm, so as not to be detected.  The editor thanked me for my suggestion, and conceded the change of position.  The young initiate now had a better chance of success.

In an assignment targeted for a high school textbook, the stripping-down process took a new turn.  This piece called for a graphic representation of the mingling of Spanish and Aztec culture in the Spanish Inquisition.  With a target audience close to college age, I wanted to create a piece that would invite my readers to really think about history.  I ordered books from the library, read articles online, downloaded photos of friars and churches, and studied Aztec paintings and carvings.  I gazed at El Greco’s View of Toledo and read a historical novel placed in fifteenth century Spain.  Soon my sketch emerged, a mask composed of symbols and scenes of the two cultures combined to form a new entity. Spanish soldiers on horseback marched toward brown-skinned peasants kneeling before corn grinders.  Crowning it all was an elegant Spanish church.  Under the military force of Isabel and Ferdinand, the Catholic Church sent its missionaries pouring into Central America, bearing cross and sword, converting and killing by the thousands in one of the most violent clashes in human history.  I placed the church right between the eyes of the mask, its rightful place as the purpose of the Inquisition.

Feedback from the editor arrived quickly.  The church should be eliminated from the illustration, as well as all visual references to religion.

Eliminated? I was stunned.  This was the opening piece for an entire unit of a textbook, intended to represent a movement in history that took place on our own continent five hundred years ago.  The repercussions of the Inquisition may still be felt today.   How could I eliminate the primary force that drove the wheel of history?  This textbook would be used by thousands of high school students.  Was this not a misrepresentation of facts, I protested, in my reply?

At the risk of losing the assignment, I stuck my neck out, and managed to strike a compromise with my editors.  The Spanish church remained, but not the cross upon it, and I blended it into the background to make it less prominent.

Had I failed the reader, by not fully representing the power of the church?  I did not know.  But as a wise friend pointed out, it could be argued that it was not really religion that drove the Inquisition to begin with – but rather, a ruthless monarchy acting under the guise of the church.  Where does fact leave off, and interpretation begin?  There is no formula for how to make the forces of history accessible to young minds.  In the end, I was satisfied with the compromise.

Finding the right blend of accuracy and simplicity is a learning process that changes from assignment to assignment, and book to book.  Artists, writers, and editors must all grapple with these complex issues.  It helps to remember we all want the same thing:  books that engage, books that sell, and books that help kids learn.

Just for fun, after an educational job is complete, I sometimes draw a second version of an illustration.  If an image came to mind that could not fit the specs, it is given a second chance, if only just as a scribble.  Scratch versions of past assignments may be found folded in my pockets, scribbled on the backs of notes from my daughter’s school, torn off shopping lists, and stuck under my keyboard.   These informal images run free like dogs let off a leash. And I walk behind them, breathing the mountain air, thinking about all that I have learned from painting pictures that teach. 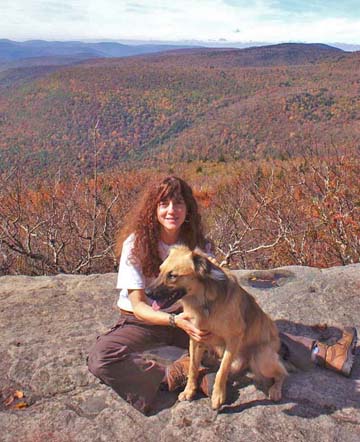 Durga Yael Bernhard is the author and/or illustrator of many books with multicultural and educational themes, including A RIDE ON MOTHER’S BACK (Gulliver Books, Harcourt Brace) and HAPPY NEW YEAR! (Dutton).  Her forthcoming book AROUND THE WORLD IN ONE SHABBAT (Jewish Lights) explores Sabbath traditions around the globe; and WHILE YOU ARE SLEEPING (Charlesbridge Publishing) is about time zones and cultures around the world.

2 Responses to Pictures that Teach