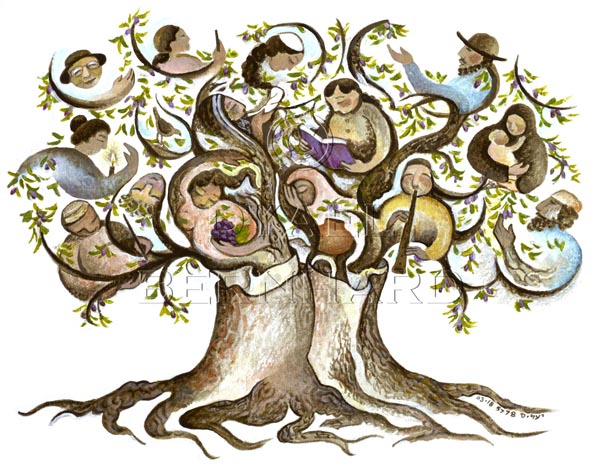 It wasn’t until after I painted Etz Chaim that I realized the influence of medieval art on my latest version of the Tree of Life.  Three years ago, I had studied medieval Jewish illuminated manuscripts while writing a review of a prodigious book on the subject titled Skies of Parchment, Seas of Ink.  This elegant and voluminous work gave me an in-depth understanding of the architecture of an illuminated manuscript – yes, architecture, constructed by a whole team of artisans to create a portable compendium of history, legend, family archive and political commentary – all bound up small enough be carried away in a pogrom, expulsion, household raid, or other anti-Semitic attack so common in the Middle Ages.  A manuscript was a handmade treasure, decorated with gold leaf (which was polished to a shine, thus “illuminated”) – a unique heirloom and record made to last.  And last they did, leaving an indelible mark on history – and centuries later, this artist’s mind. 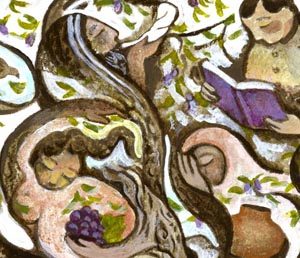 Fantastic creatures adorn the margins of these manuscripts, part human and animal, or part animal and plant.  Bodies emerge from coiled serpents, faces from borders, letters from stylized waves, flowery flames from the mouths of birds.  I soaked it all up, reading the book from cover to cover, though it was not necessary to do so in order to write my review.  Little did I realize my unconscious was also absorbing it like a sponge.  I certainly wasn’t aware of any direct influence, and didn’t strive to reproduce the style or technique of medieval art.

Yet out it came months later, unfolding on the page much like a pen and ink drawing of five hundred years ago.  I chose a parchment-like paper for my acrylics, which I watered down and used more like colored ink.  My curvy lines are held by an overall structure, trailing off into undefined edges. 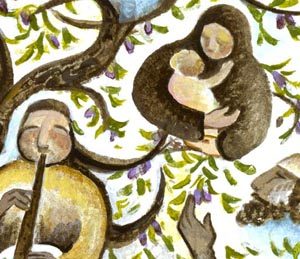 People at all angles are involved in myriad activities that demonstrate the passion of their time.  All these elements are found in medieval manuscripts.  My Tree of Life grew with a mind of its own, infused with the heightened sense of Jewish history and early painting that I had gleaned from the book.

The Torah (Jewish Bible) itself is known as a Tree of Life, or Etz Chaim in Hebrew.  Torah is a feminine word, symbolizing a living entity that is rooted in the past and branching into the future.  This is my third painting of this evocative subject – and surely not my last. 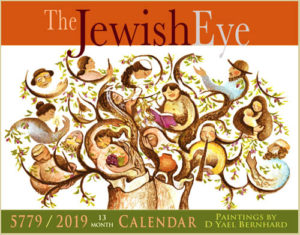 Etz Chaim is one of the paintings in my NEW calendar, The Jewish Eye 5779/2019 Calendar of Art. Order from my webstore ($18 including shipping within the continental U.S.) here.  Order from Amazon ($18) here.  (Better to order directly from the artist!  Amazon takes a big cut.)  Please help spread the word!

A good week to all. 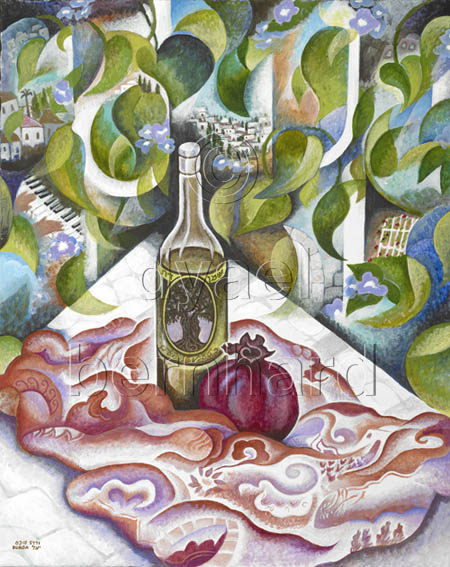 Still Life, Rechavia (or Still Life with Pomegranate) is one of the paintings in my NEW calendar, The Jewish Eye 5779 /2019 Calendar of Art.  It was painted from a study that I did on my first trip to Israel in 2009.  A friend of mine had rented an apartment in Jerusalem’s lovely neighborhood of Rechavia, where we stayed for two weeks.  The apartment had a balcony that looked down on a courtyard, where a lush eucalyptus tree grew, rising four floors and beyond, filling the courtyard with its lush foliage and curving limbs.  A white plastic table on our balcony looked to me like a blank canvas – a great place to set up a still life.  As an added bonus, a lovely vine with blue flowers had wound itself around the white wrought iron railing of the balcony. 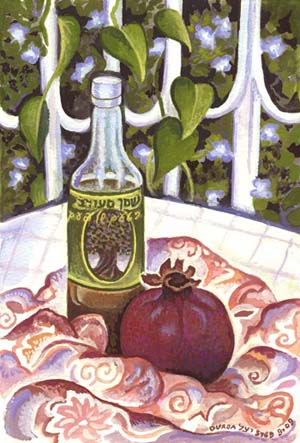 It wasn’t hard to come up with three objects to put on the table: a pomegranate, a bottle of olive oil with a beautiful label, and a colorful scarf.  I began with a study in gouache on paper – the most I was able to travel with.  I rendered the study in a fairly realistic, representational manner, knowing I would do more with it later.

I love juxtaposing a still life with something of the landscape beyond, as in my recently-featured painting Chestnut & Pussywillow.  In this case, the flowering vine seemed like an obvious choice – but when I sat down months later to sketch out the final piece on a larger canvas, something told me to take a different approach.  I wanted to capture the feeling of the neighborhood, of being in Jerusalem.  The place was filled with interesting sounds that I remembered fondly, as I have described in the caption for this piece in my calendar.  There were cooing doves in the morning; footsteps below; voices calling out in Hebrew; passing vehicles on the street, muffled by the building in between; and the everyday sounds that emanated from the other apartments that shared this courtyard.  I remembered the place as a sanctuary in the midst of the city, a small cocoon of a neighborhood, a vertical compound.  So I tried to weave these sounds and memories into the background, and wove the leaves together as if part of a tapestry.  As always, diagonals play an important role in bringing the whole thing into balance.

Rechavia has a special place in my heart, as does all of Jerusalem.

You don’t have to be Jewish – or use a wall calendar to keep track of your life – to appreciate my unique art calendar!  Check out The Jewish Eye here.  Calendars will be available on Amazon in about a week – but please order directly from me – Amazon takes a big cut.  Please help spread the word: forward this link to anyone you know who might be interested.  Thanks! 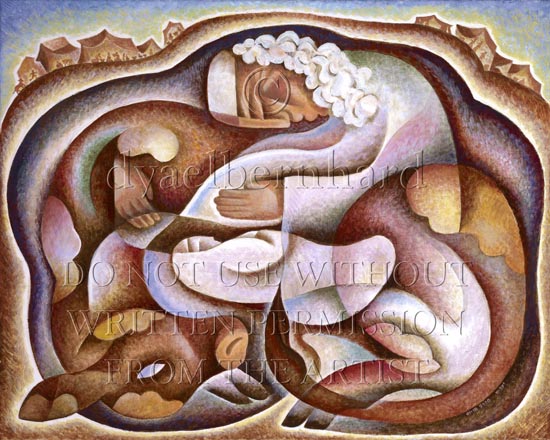 The Red Heifer is the image for June 2019 in my new calendar, THE JEWISH EYE 5779/2019 CALENDAR OF ART.  The story of the red heifer, from the portion of the Book of Numbers titled Chukat, is pictured here.  This parshah, or Torah portion, was read by Jews all over the world last week.  It always falls around summer solstice, a time that rejoices in the peak of life.  Perhaps this is no coincidence.

Chukat has a special place in my heart. Seven years ago I was in Israel for this parshah, and attended services at one of the few egalitarian synagogues in Jerusalem. The Torah reading was of the entire parshah, in a rapid, drone-like style, the reader’s white fringes swinging almost violently as he rocked in time to an internal rhythm. Etched into my memory is the sound of that stream of Hebrew words.  A female cantor also graced the service with a voice of pure gold as she carried the Torah scrolls, her face radiant with joy.  I closed my eyes and thought about the whole concept of purification; what it meant to our ancestors; how the ancients held purification as one of their most important rituals – and how today, those ancient rites have transformed into the quest for self-improvement and spiritual enlightenment.

The red heifer has taken up residence in my imagination as both a personal memory, and as a symbol of life and death. The ancient ritual of the red heifer was designed to keep us apart from the dead – for we are not to tread there too much. As ash dissolves in “living water”, so too, death dissolves in the stream of life itself. Rabbi Jonathan Sacks writes: “The Red Heifer ritual is a powerful statement that the Holy is to be found in life, not death. . . . This made biblical Judaism highly distinctive. It contains no cult of worship of dead ancestors, or seeking to make contact with their spirits . . . . God and the sacred are to be found in life.'”

With that in mind, I sought to paint my holy cow robust and fleshy, in the prime of her animal life.  I draw sustenance from the animals in my life, and envisioned this priest doing the same, his head bent in reverence, inhaling the animal odor.  The dead body he attends is weightless, clarified, and peaceful. Outside the boundaries of the red heifer, life carries on at a safe distance, with music and feasting in the “goodly tents” of humanity. Everything is composed into a whole, like a Celtic knot, completing itself.

Please take a peek at The Jewish Eye.  Order here.  Calendars will be available by July 4th.

A good week to all!