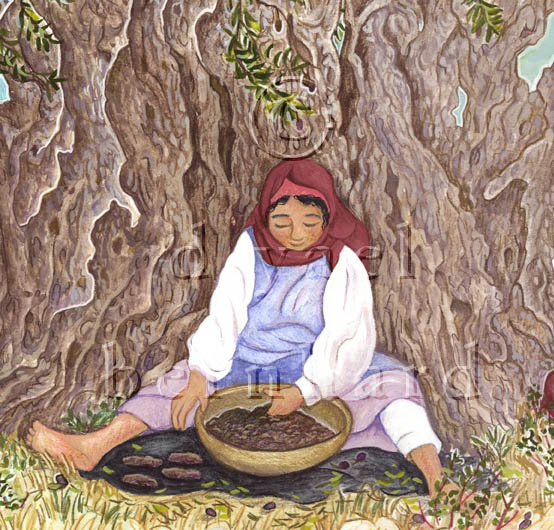 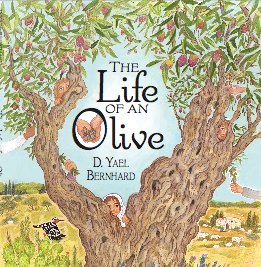 I’m pleased to announce the forthcoming publication of my newest children’s book, to be published in September by Heliotrope Books.  The Life of an Olive tells the story of a 2000-year-old olive tree in the Galilee.  The book follows the growth and changes of a single tree over twenty centuries, and gives readers ages 7-12 a peek into the lives of ordinary children who have lived in northern Israel since the beginning of the Diaspora.

Olive trees are amazing.  Like living sculptures, each tree has an individual shape and character.  These ancient trees have a uniquely interdependent relationship with people.  While they are endowed with an almost magical ability to regenerate even when cut down or burned, olive trees must be pruned by human hands in order to thrive.  With proper pruning, an olive tree can live more than two millennia, and continues to bear fruit.  Olive oil has been used since ancient times to light lamps and menorahs, to anoint kings, and along with the fruit, provides the nourishing base of the Mediterranean diet.  Olive leaves yield powerful healing medicine, and olive wood is carved into beautiful objects and useful implements.  As well, the olive tree provides important habitat for creatures ranging from preying mantises to chameleons, from doves to mongooses and more.

This was the most time-consuming children’s book I’ve ever produced.  Like an olive tree, it took a long time to come to fruition (though seven years in the life of an olive would be nothing, for me it’s a long time).  It is the culmination of four research trips to Israel, including a week of olive-picking during the harvest which I enjoyed immensely; learning to prune the trees during the winter; visits to numerous historical sites in Jerusalem and the Galilee; and drawing and painting studies of olive trees.  After the last trip, I spent several months more on research, and finally started writing.  Early this year, I began work on the illustrations.  My editor Naomi at Heliotrope Books has been a pleasure to work with, and has helped to shape this book into its final form. 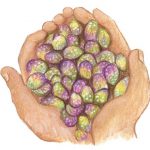 Olive trees take a long time to draw.  Once they reach the age of 100, their bark begins to buckle and fold into convoluted organic forms.  This takes time and texture to articulate, along with the olive tree’s small, tough leaves that wave in the breeze like finely shimmering hair.  And each olive fruit is a gradient of changing colors as it ripens.  I spent nearly a week on each spread, working in gouache and watercolor pencil – and among them all, the illustration shown above was my favorite.  I grew quite fond of Ester, my fictitious child of 1570, who sits happily under the olive tree, making cakes of olive mash – fiber left over from pressing the fruit into oil – to be burned as fuel for cooking.  Ester’s family has fled the Spanish Inquisition, escaping to the mountains of the northern Galilee.  A quick peek at the timeline at the beginning of the book tells the reader the region was under Ottoman rule at the time, and was known as Eretz Yisrael or The Holy Land to the inhabitants of the region.  Many centuries earlier, the land where Ester sits was known as Palaestina, thus named by first Greek and later Roman invaders – and still earlier, as the territory of the tribe of Naphtali, the sixth son of the Biblical Jacob.  Roughly three hundred years after Ester dies, this land will again be called Palestine by the British, until 1948, when it officially becomes Israel again – for the second time in the olive tree’s 2000-year lifetime.

If you like history in pictures, look for this unique educational picture book in the fall. I will keep you posted when it becomes available.   You just might fall in love with olive trees, like I did.

A happy Fourth of July holiday to all,

Author / Illustrator of
THE HUNGRY HAGGADAH: A Passover Story in Rhyme
THE JEWISH EYE – 2016 /5776 calendar of art
JUST LIKE ME, CLIMBING A TREE: Exploring Trees Around the World
NEVER SAY A MEAN WORD AGAIN – A Publisher’s Weekly Starred Review;
winner of the Sydney Taylor Award and National Jewish Book Council Award
THE DREIDEL THAT WOULDN’T SPIN – A Toyshop Tale of Hanukkah
WHILE YOU ARE SLEEPING – A Children’s Book Council Notable Book
AROUND THE WORLD IN ONE SHABBAT – A Sydney Taylor Honor Book
GREEN BIBLE STORIES FOR CHILDREN – Nat’l Green Book Festival Notable Book
A RIDE ON MOTHER’S BACK – An American Bookseller Assoc. Pick of the List
– and more!
This entry was posted in Children's Books, Image of the Week and tagged children's books, Galilee, history of Israel, Jewish history, olive trees, olives. Bookmark the permalink.

One Response to Olive Mash for Fuel