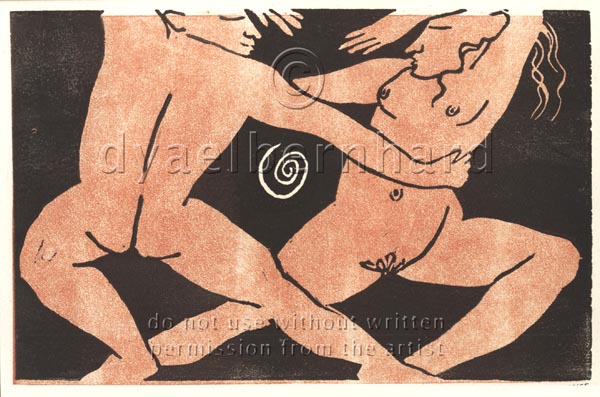 Moon Dance is another very old work of art that I created over thirty years ago, in my early twenties.  This might even be my very first linoleum block print.  I was about to get married for the first time, and the dance of relationships was on my mind.  I was also exploring concepts of duality in Eastern religion and Jungian psychology.  The concept of “the third thing” that arises out of duality was fascinating to me.  The idea was that out of an interaction between opposites arises something that belongs to neither individual, but has a purpose of its own.  Obviously, a child is a good example of such a manifestation, but I liked the idea that the relationship itself could be a separate entity – represented here by a rather funky spiral.

A spiral may be perceived as either coiling inward or expanding outward.  Both seem true of an intimate relationship.  Here, as in life, I was challenged to keep the whole thing loose.  Although a linoleum block carving is very fixed and solid, there’s something freeing about it that enables the artist to simplify.  I used diagonal lines to create a sense of movement, and the few details, I hoped, would be light and humorous.

I smiled when I came across this old piece a few weeks ago while looking through some of my earliest prints and paintings.  Art has a way of capturing memories.  What I remember most, and wanted to convey, was the spirit of optimism that infused my awareness that year.  Now the younger child produced by that marriage is older than I was when I carved this print.

Wishing you a very good week.

D Yael Bernhard
http://dyaelbernhard.com
Author / Illustrator of:
LOVE IS – a unique crossover book for all ages
THE LIFE OF AN OLIVE – Explore the life of a 2000-year-old olive tree
JUST LIKE ME, CLIMBING A TREE: Exploring Trees Around the World
NEVER SAY A MEAN WORD AGAIN – A Publisher’s Weekly Starred Review;
winner of the Sydney Taylor Award and National Jewish Book Council Award
THE DREIDEL THAT WOULDN’T SPIN – A Toyshop Tale of Hanukkah
WHILE YOU ARE SLEEPING – A Children’s Book Council Notable Book
AROUND THE WORLD IN ONE SHABBAT – A Sydney Taylor Honor Book
A RIDE ON MOTHER’S BACK – An American Bookseller Assoc. Pick of the List
– and more!
This entry was posted in Image of the Week. Bookmark the permalink.