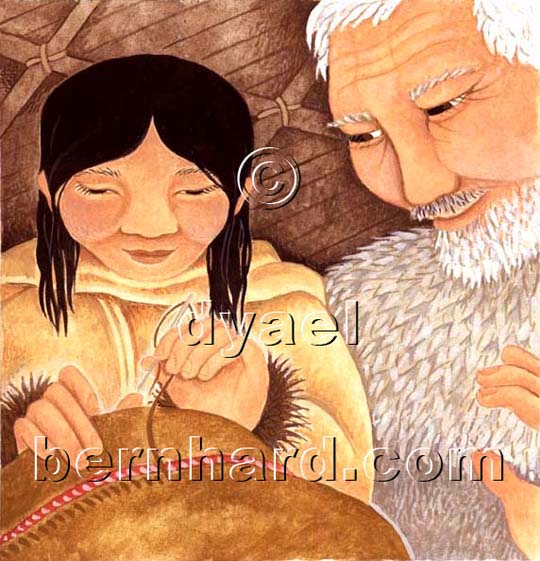 “The Magic Needle” is an Inuit folk tale that I was commissioned to illustrate for a printed children’s magazine, Cricket, ten years ago.  Cricket, along with Ladybug, Spider, Appleseed, and several others, were innovative publications for children.  They were full of photographs and illustrations, and I was happy to contribute.

The story told of a girl who was persecuted for being left-handed.  She had to learn the traditional skills that every girl in her tribe was expected to learn, but she was not allowed to sew with her left hand.  This led to fits of frustration, and finally the girl stormed out of camp.

A wise elder came to her rescue by teaching the girl secret incantations that would enable her to sew with her right hand – the proper way.  What the reader understands is that the only real purpose of these incantations was to create a pretext for the girl to sew in private – where she could use her left hand in peace.  The people believed the problem had been solved, and indeed it had – that is, the problem of their perception of what is allowable and what is not.

I loved this simple story which teaches children that sometimes it’s better to just avoid a problem than it is to fight it.  The editors at Cricket flipped when they saw this illustration.  They did not expect such a detailed, close-up view.  I put more into the image than I had to, because I related to the relationship between this wise and patient elder and the budding young girl.  My own grandmother, of blessed memory, was like that.  I wanted to show the special moment of the girl’s peaceful concentration, and the old man’s gratification in watching her.

Order The Magic Needle as a POSTER this week, and get a free greeting card (of the same image)!   $10 for the poster and card, shipping included.  Order your poster here!

D Yael Bernhard
http://dyaelbernhard.com
Author / Illustrator of
JUST LIKE ME, CLIMBING A TREE: Exploring Trees Around the World – new!!
THE JEWISH EYE 5776/2015 – calendar of art – new!
NEVER SAY A MEAN WORD AGAIN – A Publisher’s Weekly Starred Review;
winner of the Sydney Taylor Award and National Jewish Book Council Award
THE DREIDEL THAT WOULDN’T SPIN – A Toyshop Tale of Hanukkah
WHILE YOU ARE SLEEPING – A Children’s Book Council Notable Book
AROUND THE WORLD IN ONE SHABBAT – A Sydney Taylor Honor Book
GREEN BIBLE STORIES FOR CHILDREN – Nat’l Green Book Festival Notable Book
A RIDE ON MOTHER’S BACK – An American Bookseller Assoc. Pick of the List
– and more!
This entry was posted in Image of the Week and tagged Cricket Magazine, Durga Yael Bernhard, illustration, Inuit folk tale, left-handed. Bookmark the permalink.