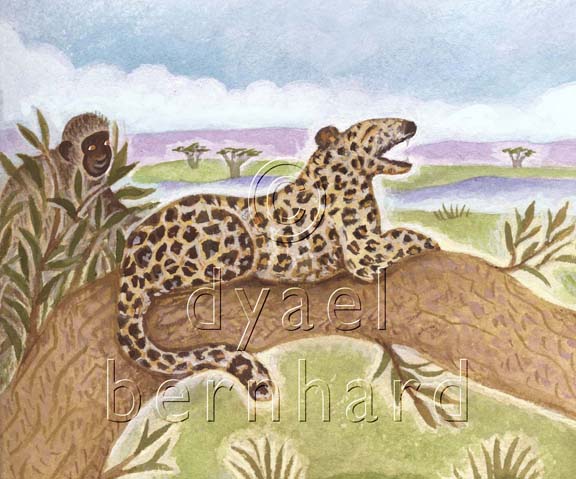 This was a fun illustration.  I was commissioned to create just one image for a school textbook as part of the “Harcourt Anthology Project”, which included the classic African fable of how the leopard got its spots.  The original gouache painting is 17″ wide.

In the story, Hyena is cruel to Tortoise, trapping him up in a tree.  Hyena walks away from poor helpless Tortoise, laughing at him.  Leopard, by contrast, is kind and compassionate, and saves Tortoise from his predicament.  In return, Tortoise carefully paints a beautiful design on Leopard’s coat, making him the most beautiful animal in the jungle.  Hyena sees how beautiful Leopard has become, and is jealous.  He issues a false apology to Tortoise, and asks him to paint his coat, too.  Tortoise complies, working slowly to create a pattern.  But each time he steps back, all the animals laugh harder and harder.  Tortoise has created a blotchy, messy design that makes Hyena the laughing stock of the jungle!  And that is why to this day, Hyena only comes out at night.  But he is still cruel, and laughs at all the other animals. 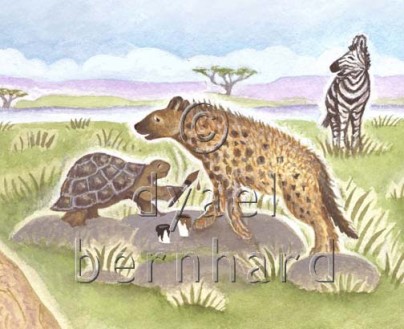 As a book illustrator, I find it easy and refreshing to create a stand-alone illustration.  I only had to paint these animals once.  And truly, I spent so much time rendering the irregular organic shapes of the leopard’s spots – and making them look like they’re part of an animal’s body, with contour – I’m not sure I could have done it twice.  This laughing leopard really brightened my week!  As for Hyena . . . well, he got what he deserved: a bruised ego.

Order How the Leopard Got Its Spots as a POSTER this week, and get a free greeting card (of the same image)!   $10 for the poster and card, shipping included.  Order your poster here!

Author / Illustrator of
JUST LIKE ME, CLIMBING A TREE: Exploring Trees Around the World – new!!
THE JEWISH EYE 5776/2015 – calendar of art