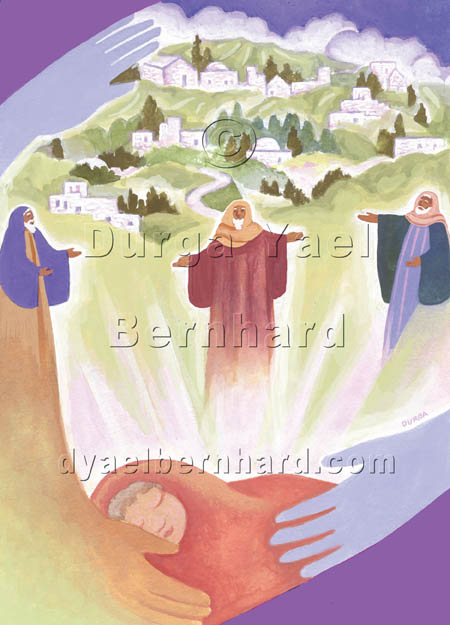 Here is another illustration that was commissioned by a progressive Christian publisher, depicting the the archetypal trio who according to legend, came to Bethlehem to herald the birth of the Christian messiah.  As an illustrator thinking on a more universal level, I saw this as a symbol of hope for that which is blessed and divine among humans.

Although Israel has a short rainy season, I chose to show it here, both for the sense of new growth and because the greening of the land takes place prior to the season of Easter.   The buildings of Bethlehem are rather simplified.  For years before I first visited Israel, I illustrated the holy cities of the land from photos and from my imagination.  These were rather naive, and later evolved into a more nuanced depiction once I had walked the streets of Jerusalem myself.

The presence of three wise men, or magi, is a comforting thought.  The world needs more of them, which is why, despite only the briefest description in the Book of Matthew, they crystallized in the collective Western mind like the star of Bethlehem, and have continued to shine as meaningful.  Together with the holy infant, the three wise men form a continuous arc from infancy to old age, from innocence to maturity.  I enjoyed depicting these opposites, with strong color integrating the two against the green and white landscape.

The Three Kings makes a nice Christmas card!  5″x7″ greeting cards are $3 each or 6 for $15.  All prices include shipping.  Order your cards here.

D Yael Bernhard
http://dyaelbernhard.com
Author / Illustrator of
THE JEWISH EYE – 2016 /5776 calendar of art  – new!!
JUST LIKE ME, CLIMBING A TREE: Exploring Trees Around the World – new!!
NEVER SAY A MEAN WORD AGAIN – A Publisher’s Weekly Starred Review;
winner of the Sydney Taylor Award and National Jewish Book Council Award
THE DREIDEL THAT WOULDN’T SPIN – A Toyshop Tale of Hanukkah
WHILE YOU ARE SLEEPING – A Children’s Book Council Notable Book
AROUND THE WORLD IN ONE SHABBAT – A Sydney Taylor Honor Book
GREEN BIBLE STORIES FOR CHILDREN – Nat’l Green Book Festival Notable Book
A RIDE ON MOTHER’S BACK – An American Bookseller Assoc. Pick of the List
– and more!
This entry was posted in Image of the Week and tagged Bethlehem, Chirstmas cards, Durga Yael Bernhard, religious art, The Three Kings. Bookmark the permalink.