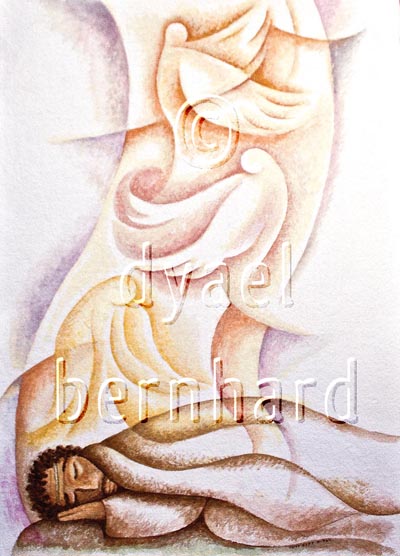 Dreams have long been a life-shaping force in my life.  I had a cherished mentor in my twenties, an octogenarian named Winifred – a wise and learned Jungian analyst who taught me to understand the language of dreams.  The more I understood, the more my dreams revealed.  Many of my paintings have been inspired by dreams.

So years later, when I read the story of Jacob’s ladder, in which the God of Abraham and Isaac speaks to the young man in a dream, I was immediately intrigued.  It’s not just the content of the dream but the place where Jacob sleeps that spoke to me.  Fleeing from his brother’s wrath, Jacob finds refuge in the wilderness – in that ineffable, in between place to which his destiny has led him.  His life was about to change forever, and the effects have rippled through history.

I knew this would become a painting, and I knew it would have to be large – perhaps taller than any painting I’ve ever done.  The ladder was fluid and curved in my mind’s eye, and the angels like the moving silhouettes of birds, waving their wings as if swimming upstream – not a stream of water, but of God’s energy – for Jacob was blessed with God’s presence, protection, and promise of a future for his people.

I did this small, quick color study to anchor the image, but have yet to do the tall painting.  Though it’s important to me, large paintings must always take a back seat to my paid work, as they’re quite time-consuming.  The image is also still gestating.  The process by which my paintings come to the surface is one of following, for me, not leading.  I do not control what I’m compelled to do next.  That it will happen, I do not doubt.

Jacob’s Ladder is the image for October 2018 in The Jewish Eye 5778 / 2018 Calendar of Art – on sale in the new Jewish section of my webstore:  http://jewisheyeart.com:  $16 until the end of Sukkot, including shipping within the continental U.S.
$18 on Amazon.

D Yael Bernhard
http://dyaelbernhard.com
Author / Illustrator of
THE JEWISH EYE 2018 / 5778 Calendar of Art – New!!
LOVE IS – a unique crossover book for all ages
THE LIFE OF AN OLIVE – Explore the life of a 2000-year-old olive tree
JUST LIKE ME, CLIMBING A TREE: Exploring Trees Around the World
NEVER SAY A MEAN WORD AGAIN – A Publisher’s Weekly Starred Review;
winner of the Sydney Taylor Award and National Jewish Book Council Award
THE DREIDEL THAT WOULDN’T SPIN – A Toyshop Tale of Hanukkah
WHILE YOU ARE SLEEPING – A Children’s Book Council Notable Book
AROUND THE WORLD IN ONE SHABBAT – A Sydney Taylor Honor Book
A RIDE ON MOTHER’S BACK – An American Bookseller Assoc. Pick of the List
– and more!
This entry was posted in calendars, Image of the Week, Jewish Learning. Bookmark the permalink.