Happy 2016!  On the occasion of the New Year, I’m inspired to share an illustration from one of my first multicultural picture books: Happy New Year!, published twenty years ago by Dutton Children’s Books (established in 1852, one of the oldest imprints of Penguin Books for Young Readers). 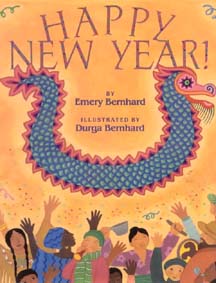 The book was a survey of New Year’s customs from around the world.  I depicted rituals from the Druids of the British Isles; Islamic scrolls, an Aztec calendar; the Greek god Janus with two faces looking backward and forward (from which the word January is derived); the Roman ritual of throwing pots out windows to “break” the old year; Balinese demons; Chinese dragons; gypsy tea leaves; a Russian scare crow burned away with the old year; the Indian festival of Diwali; a rabbi blowing a shofar; and the ball dropping at Times Square in New York City.

Last but not least came an image of an Iroquois family from 19th-century North America.  Like many cultures around the world, this tradition ritualized expelling or overturning the old year before the new year could begin.  The text tells of a sacred ceremony of renewal in which the people give thanks for their blessings, and make a pledge with their Creator to right the wrongs of the past.  Among the important rites is the stirring of the ashes in a ceremonial fire.  Once the ashes have been turned over, a new fire is started, and the people are collectively given a new year.

I’m sitting in front of my own fire as I write these words, having emptied my woodstove of the ashes that burned on New Year’s Eve and started a new fire from fresh logs brought into my house.  I also have some fresh intentions for the New Year, and two children’s books in progress which will be published this spring and fall.  I’m grateful for the blessings in my life, both old and new, and I feel hopeful about the year to come.

Happy New Year to all my readers!  Wishing you many blessings in 2016.

Author / Illustrator of
JUST LIKE ME, CLIMBING A TREE: Exploring Trees Around the World – new!!
THE JEWISH EYE 5776/2015 – calendar of art – new!
NEVER SAY A MEAN WORD AGAIN – A Publisher’s Weekly Starred Review;
winner of the Sydney Taylor Award and National Jewish Book Council Award
THE DREIDEL THAT WOULDN’T SPIN – A Toyshop Tale of Hanukkah
WHILE YOU ARE SLEEPING – A Children’s Book Council Notable Book
AROUND THE WORLD IN ONE SHABBAT – A Sydney Taylor Honor Book
GREEN BIBLE STORIES FOR CHILDREN – Nat’l Green Book Festival Notable Book
A RIDE ON MOTHER’S BACK – An American Bookseller Assoc. Pick of the List
– and more!
This entry was posted in Children's Books, Image of the Week and tagged Durga Bernhard, Happy New Year, Iroquois, multicultural children's books. Bookmark the permalink.