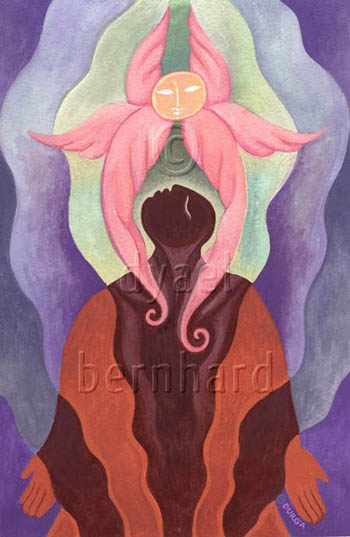 Recently on Erev Shabbat (a Sabbath eve), I gave a talk at my synagogue about my journey as a Jewish artist, and how The Jewish Eye calendar has grown out of my work as both fine artist and illustrator.  At the suggestion of several listeners, excerpts of that talk are copied here, along with my very first Jewish painting, Here I Am, from the Book of Isaiah.

I am a Jewish artist.  I’ve been painting for over forty years. But as recently as a decade ago, I would have described myself simply as a modern artist, and a Jew by heritage only.  I was raised in a secular family, and my sister and I were told we were “cultural Jews”.  I accepted that without question.

As a teenager, I knew nothing about Judaism except that it was patriarchal and monotheistic – an ossified, oppressive tradition in my adolescent mind.  Other than my grandmother’s mysterious past, I gave my heritage no further thought.

. . . until years later, when my budding career as an artist led me to explore further. Much later, and much further. The year was 1996, and I had just left my marriage of sixteen years. It was a difficult time.  My ex-husband and I agreed on joint custody of our two children; I was to have them half the time.  As a self-employed freelancer with no stable income, I was facing what felt like a mountain of responsibility.

On my first day of single parenthood, the timing belt in my car broke and my engine seized. I had not finished moving into my new rented house, and suddenly did not have a car.  The new engine cost more money than the modest funds with which I had left my marriage – all I had to my name.

I stepped up my quest for work, and started networking.  I contacted an illustrator colleague who lived in my new town.  She introduced me to her husband, who did graphic design work for the national headquarters of the United Church of Christ in Cleveland, Ohio. He worked with numerous illustrators, for their many publications. Would I like to do some Christian illustration?

As a desperate mother with two mouths to feed, I did not hesitate. By this time I was in my thirties, and felt my lack of knowledge of the Bible to be a lacuna in my understanding of Western civilization. I was curious, and wanted to do a good job. I consulted with a Christian friend who was working toward her Masters of Divinity. As a progressive thinker who identified with several denominations, she helped me understand the deeper content of the texts I was hired to illustrate.

Since 1996, I’ve illustrated hundreds of Biblical passages for several Christian publishers. Most often, I am commissioned to illustrate the weekly Bible portion, to be distributed to thousands of parishes nationwide. About 80-90% of the passages come from the New Testament. The remaining 10-20% comes from the Torah, which of course is given to me as part of “The Old Testament” section of the Christian Bible.

As chance would have it, the very first passage I was given to illustrate was Isaiah chapter 6, which reads:

Then one of the seraphim flew over to me with a live coal. He touched it to my lips and declared, “Now that this has touched your lips, your guilt shall depart and your sin be purged away. ” Then I heard the voice of my Lord saying, “Whom shall I send? Who will go for us?” And I said, “Hineni . . .shelacheni.  Here I am; send me.”

This was my first Jewish illustration.  Here I am – Send me.   It was as if the assignment was calling to me as an artist.  Send me where?  Time would tell, for sure.

As you can see, the figure of Isaiah is a patchwork of two colors. I could not decide if his skin should be light or dark. So I made a design of both. The African influence is obvious. My client, a progressive graphic designer at UCC – loved it. Two more paintings of this image have followed – one of which is not yet finished – which is to say I haven’t started it yet, but it’s complete in my head!

As I continued to work on these illustrations, I began to form my own impressions of the Biblical texts.  I felt great respect for the Christian Bible – but it was the stories of Genesis and Exodus that captured my artist’s soul. Slowly I began to glimpse the many layers of meaning in this Hebrew Bible – like a great, collective, ancient dream waiting to be unraveled.  Little did I know the riches that lay ahead! 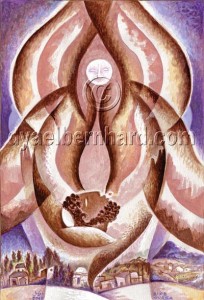 As of this writing, I’ve created approximately 122 Jewish-themed fine art paintings – including 23 paintings of Tanakh (the Hebrew Bible), 15 of Jewish holidays, 46 of Jewish tradition and identity; and 38 landscapes of Israel. I’ve also created numerous drawings, and illustrated six Jewish-themed children’s books, three of which I’ve written, and two of which have won the Association of Jewish Library’s Sydney Taylor Award.

The Jewish Eye Calendar of Art – on sale in my webstore until October 14th – is now in its fourth year. Weaving my collection of Jewish-themed art into calendars has been a pleasure for me, as a book designer – an opportunity to create a body of work made up of diverse sub-themes within an overarching theme. Every month has either a holiday or a Torah portion that inspires an image, with related themes growing from there like branching vines. 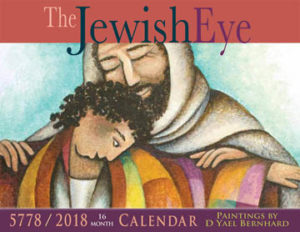 I feel like I’m participating in the weaving of a great tapestry. It is a privilege, an adventure, and a never-ending learning process, as Judaism continues to fertilize and feed my art.

And I am still Jewish, first and foremost, as an artist.

D Yael Bernhard
http://dyaelbernhard.com
Author / Illustrator of
THE JEWISH EYE 2018 / 5778 Calendar of Art – New!!
LOVE IS – a unique crossover book for all ages
THE LIFE OF AN OLIVE – Explore the life of a 2000-year-old olive tree
JUST LIKE ME, CLIMBING A TREE: Exploring Trees Around the World
NEVER SAY A MEAN WORD AGAIN – A Publisher’s Weekly Starred Review;
winner of the Sydney Taylor Award and National Jewish Book Council Award
THE DREIDEL THAT WOULDN’T SPIN – A Toyshop Tale of Hanukkah
WHILE YOU ARE SLEEPING – A Children’s Book Council Notable Book
AROUND THE WORLD IN ONE SHABBAT – A Sydney Taylor Honor Book
A RIDE ON MOTHER’S BACK – An American Bookseller Assoc. Pick of the List
– and more!
This entry was posted in Image of the Week, Jewish Learning. Bookmark the permalink.