All images are available as greeting cards for Father’s Day. 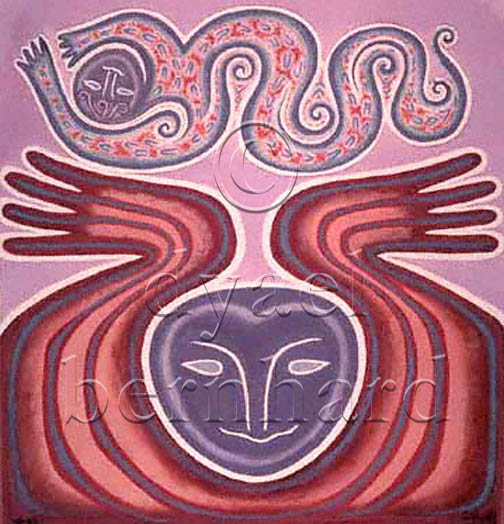 Father & Daughter (above) was painted in the early 1980s.  I was studying art and busily immersing myself in ancient traditions from all over the world – especially African.  I was also studying the I-Ching and the psychology of Carl Jung, both of which gave me the language of archetypes.  With this language, I could begin to understand the dynamic dualities that make up our world – and I could think of images and symbols in new ways.

One such duality was that of fathers and daughters.  The polarity between the older, wiser, protective masculine and the young, carefree, naive feminine was visible in my own daughter’s relationship with her father, as well as that of a close woman friend with her dad.  I sought to contrast these opposite figures with a bold, earthy design. 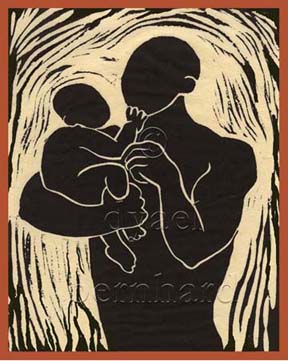 Father & Child (right) is a linoleum block print.  Watching my son as a toddler with his father, I was amazed by the different body language between them (compared to how he was with me).  My son seemed to enjoy the strong grip of his father’s hand, and never lost interest in his rough chin.  There was something bold but tender in their relating, which I tried to capture as I carved this image.

Incarnation of the Sun (below) is one of my most popular older paintings.  Here is the essential masculine energy that every child draws from his or her father like the energy of the sun. The tenor of the father’s voice, the warmth and breadth of his body, the physical power and gentleness of a man all affect his child at a cellular level. 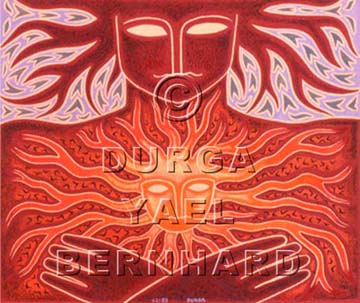 All three images are available as 5″x7″ greeting cards for Father’s Day.  They’re usually blank inside, but for the holiday I will print “Happy Father’s Day!”  Order cards by filling in the titles here.