The Death of Jacob

Image of the Week 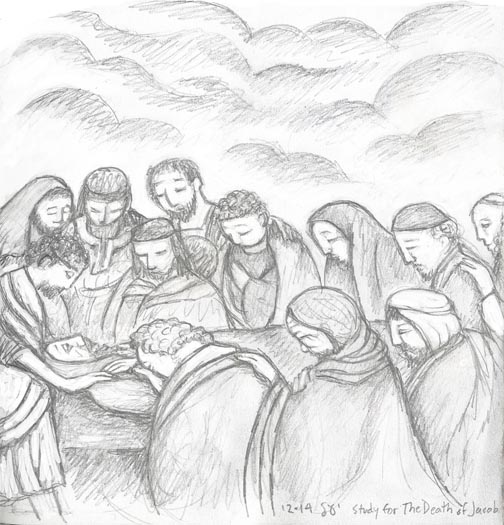 Two studies for “The Death of Jacob”

As a teacher of Judaic studies, I’ve come to associate winter with the death of Jacob.  Every year in December or January, the Torah portion Va-y’chi (“And he lived”) comes up, taking its turn in the cycle of weekly passages read from the Hebrew Bible by Jews all over the world.  Every year as I reread this passage, ideas for paintings start germinating.  This winter, I decided to finally bring at least one of them to fruition.

Va-y’chi tells of the great patriarch’s final hours.  Surrounded by his twelve sons, Jacob – or Israel ( “God-wrestler”), as he is also known in his later years – delivers a poetic testament to each of his sons, who are destined to become the progenitors of the twelve tribes from which all Jews descend.  As Israel feels death approaching, he encapsulates his sons’ temperaments in words, and speaks of their destinies.

The elements of this poetic testament make for rich imagery.   Jacob likens his sons to fruit full of vigor, to a ship in a harbor, to boiling water, a skinny donkey, a hamstrung ox, a devouring wolf,  a crouching lion, and even a horned snake.  To Simon and Levi, the old man says what he chose not to utter long ago in the height of their destructive youth.  Israel lingers last and longest on Joseph, his most beloved son, upon whom every blessing is lavished.  “The bounty of the timeless hills: let them be on Joseph’s head,” says Jacob lovingly.

I often create multiple versions of an image, and this was no exception.  What emerged in my first pencil sketch (above) was a side view of the old man on his death bed with his sons gathered around him.  The grieving brothers really started to come alive.  So much regret!  So much anguish.  Jacob did not have an easy life, and his sons brought him great sorrow, mixed with prosperity and joy. 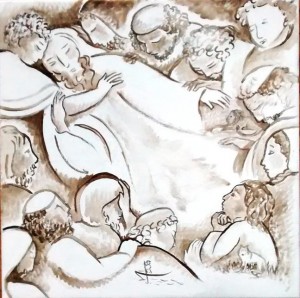 But the side view of Jacob and his sons was missing something.  I tried again, this time sketching from an aerial view.   From this perspective, Jacob became ethereal in his form, his body floating, his robe a place for billowing sky and rolling meadows, the space between his sons a place for all those animals and symbols. This design could become a weaving of history in which Israel takes his place as he is “gathered to his kin”.

Jacob’s only daughter, Dina,  joins this picture, too – for though the Torah does not mention her name in this passage, it seems only right that she should be there. I’m grateful to be part of a tradition that allows for artistic interpretation!

I favor the second, aerial perspective, because it has the potential to convey more meaning. The image you see is a brush drawing in brown acrylics, just to lay down basic shapes, lines, and tones.  This painting is still in progress as I write these words.

Which perspective speaks more to you?  Your comments are welcome!

Wishing you a good week, and if you live in the northeast U.S. as I do, stay cozy through the impending snowstorm.

D Yael Bernhard
http://dyaelbernhard.com
Author / Illustrator of
THE JEWISH EYE – 2015 / 5775 calendar of art
NEVER SAY A MEAN WORD AGAIN – A Publisher’s Weekly Starred Review
THE DREIDEL THAT WOULDN’T SPIN – A Toyshop Tale of Hanukkah
WHILE YOU ARE SLEEPING – A Children’s Book Council Notable Book
AROUND THE WORLD IN ONE SHABBAT – A Sydney Taylor Honor Book
GREEN BIBLE STORIES FOR CHILDREN – Nat’l Green Book Festival Notable Book
A RIDE ON MOTHER’S BACK – An American Bookseller Assoc. Pick of the List
– and more!
This entry was posted in Image of the Week, Jewish Learning and tagged 12 tribes, Israel, jacob, Torah, Va-y'chi. Bookmark the permalink.