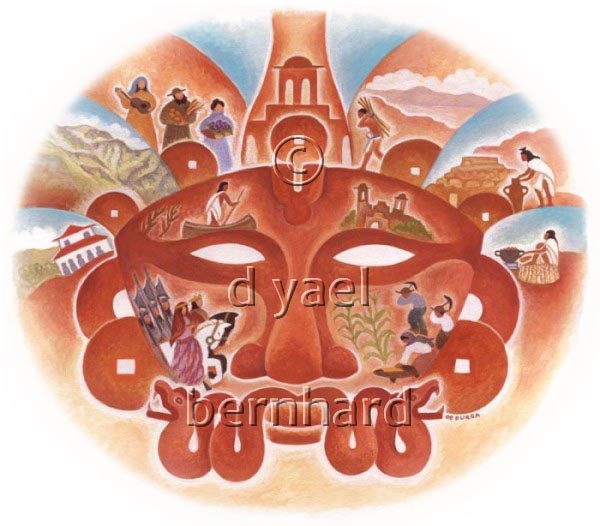 . . . That was the name of the assignment I received to create this illustration for a high school textbook.  I was commissioned to paint a full-page chapter opening.  The client wanted a graphic representation of the clash – and fusion – between Spanish and Aztec culture in the Spanish Inquisition.

With a target audience close to college age, I wanted to create a piece that would invite my readers to really think about history.  I ordered books from the library, read articles online, downloaded photos of friars and churches, and studied Aztec paintings and carvings.  I gazed at El Greco’s View of Toledo and read a historical novel placed in 15th century Spain, The Last Jew (an excellent book, which I hear is to become a film soon) by renowned historical fiction writer Noah Gordon.  From this immersion, my sketch emerged.

The interweaving of Spanish and Aztec culture would take the form of a mask.  This mask would be fierce as an Aztec carving, bearing symbols and scenes of the two cultures, all combined to form a new entity.  Spanish soldiers on horseback marched toward brown-skinned peasants kneeling to grind corn.  Encompassing it all was the “face” of the Inquisition.

Upon this mask, front and center, was an elegant Spanish church.  Under the military force of Isabel and Ferdinand, the Catholic Church sent its missionaries pouring into Central America, bearing cross and sword, converting and killing by the thousands in one of the most violent clashes in human history.  I placed the church right between the eyes of the mask, its rightful place as the purpose of the Inquisition.

Feedback from the editor arrived quickly.  The church should be eliminated from the illustration, I was told, as well as all visual references to religion.

Eliminated?  I was stunned.  This was the opening piece for an entire unit of a textbook, intended to represent a movement in history that took place on our own continent 500  years ago.  The repercussions of the Inquisition may still be felt today.   How could I eliminate the primary force that drove the wheel of history?  This textbook would be used by thousands of high school students.  Was this not a misrepresentation of facts, I protested, in my reply?

At the risk of losing the assignment, I stuck my neck out, and managed to strike a compromise with my editors.  The Spanish church remained, but not the cross upon it, and I blended it into the monochromatic background to make it less prominent.

Had I failed the reader, by not fully representing the power of the Church?  I did not know.  But as a wise friend pointed out, it could be argued that it was not really religion that drove the Inquisition to begin with – but rather, a ruthless monarchy acting under the guise of the church.  Where does fact leave off, and interpretation begin?  There is no formula for how to make the forces of history accessible to young minds.  In the end, I was satisfied with the compromise.  One of these days, I’ll rework the church to make it more prominent and colorful – that is, if I can find the original illustration.  😉

This post is partially copied from a previous post on this blog, Pictures That Teach, giving examples of other issues of historical integrity I’ve encountered as an educational illustrator.

Order Culture Clash as a POSTER this week, and get a free greeting card (of the same image)!   $10 for the poster and card, shipping included.  Order your poster here!

D Yael Bernhard
http://dyaelbernhard.com
Author / Illustrator of
JUST LIKE ME, CLIMBING A TREE: Exploring Trees Around the World – new!!
THE JEWISH EYE 5776/2015 – calendar of art – new!
NEVER SAY A MEAN WORD AGAIN – A Publisher’s Weekly Starred Review;
winner of the Sydney Taylor Award and National Jewish Book Council Award
THE DREIDEL THAT WOULDN’T SPIN – A Toyshop Tale of Hanukkah
WHILE YOU ARE SLEEPING – A Children’s Book Council Notable Book
AROUND THE WORLD IN ONE SHABBAT – A Sydney Taylor Honor Book
GREEN BIBLE STORIES FOR CHILDREN – Nat’l Green Book Festival Notable Book
A RIDE ON MOTHER’S BACK – An American Bookseller Assoc. Pick of the List
– and more!
Posted in Image of the Week, Jewish Learning | Tagged B’rei
This entry was posted in Image of the Week, misc and tagged Aztec, Durga Yael Bernhard, educational illustration, illustration, Inquisition, textbook art. Bookmark the permalink.