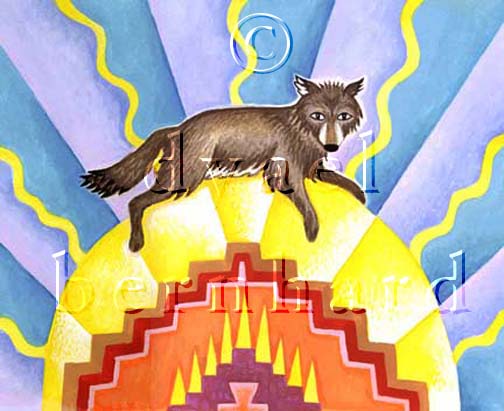 Coyote Rides the Sun is the title of a native American folktale of the Paiute Indians, who once thrived in the American southwest.  The story is retold here in slim hardcover format for a publisher that calls itself simply A Child’s World.  I was pleased to accept this assignment, along with a companion story, four years ago.

Folklore provides a unique window into the diverse cultures of our complex world.  They also reveal the common threads that seem to be mysteriously woven among us.  It seems like stories such as this one abound:  an over-zealous, over-confident protagonist dares to draw close to the source of life, or light, and suffers the consequences.  In the Lakota story of White Buffalo woman, despite many warnings an eager young man approaches directly the Great Spirit in the form of a shining woman, and is turned to a pile of bones.  In the Greek myth of Icarus, again despite warnings the young man flies too close to the sun, causing the wax wings that hold him aloft to melt.  In the Torah (Hebrew Bible), the sons of Aaron draw too close to the holy altar of the mishcan (tabernacle), and are instantly swallowed up by the earth.  Moses avoids a similar fate by hiding in a crack between two rocks in order that he see only the back of God passing by; he knows better than to look the Source of Life in the face – and it is because of this sort of humility that Moses is chosen as a leader to begin with.

Coyote’s punishment seems less severe, as his pushy ego only causes his fur to be singed.  Though this change is forever, Coyote mostly suffers a bruised ego and exhaustion.  The children who read this book are spared the gruesome consequences often suffered by those who dare to approach directly the divine mystery that sustains all of life.

But if they keep reading the folklore of the Paiute, they’ll know it won’t be long before Coyote gets into trouble again . . .

Order Coyote Rides the Sun as a POSTER this week, and get a free greeting card (of the same image)!   $10 for the poster and card, shipping included.  Order your poster here.  Your can also order a six-pack of cards for $15.  Order greeting cards by filling in the title here.

A good week to all,

Author / Illustrator of
THE HUNGRY HAGGADAH: A Passover Story in Rhyme
THE JEWISH EYE – 2016 /5776 calendar of art
JUST LIKE ME, CLIMBING A TREE: Exploring Trees Around the World
NEVER SAY A MEAN WORD AGAIN – A Publisher’s Weekly Starred Review;
winner of the Sydney Taylor Award and National Jewish Book Council Award
THE DREIDEL THAT WOULDN’T SPIN – A Toyshop Tale of Hanukkah
WHILE YOU ARE SLEEPING – A Children’s Book Council Notable Book
AROUND THE WORLD IN ONE SHABBAT – A Sydney Taylor Honor Book
GREEN BIBLE STORIES FOR CHILDREN – Nat’l Green Book Festival Notable Book
A RIDE ON MOTHER’S BACK – An American Bookseller Assoc. Pick of the List
– and more!
This entry was posted in Children's Books, Image of the Week. Bookmark the permalink.