Introducing my new weekly post “Image of the Week”

Happy 2015!  We begin at the beginning, with new resolve.  This year, mine is to post an image each week along with a little writing.  And it’s on sale!  This week only: order a POSTER of the featured image this week, and get a free greeting card (of the same image) along with it!  (Poster plus greeting card for $10, includes shipping)

What better image to start with than Beginning Prayer? 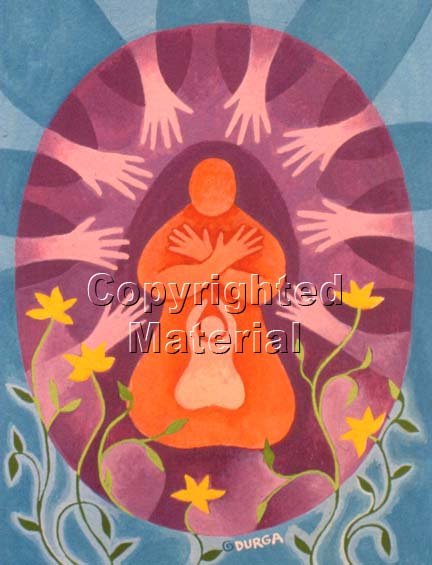 Beginning Prayer is an image of inner commitment to new growth and life.  The painting was originally commissioned as an illustration for national headquarters of United Church of Christ, a longstanding client of mine in the 90s.  This was among the first of hundreds of commissions I did for them.  UCC was a progressive organization that gave me much creative freedom.  They liked my universally human images and multicultural style.  I liked the broad and tolerant interpretation of scripture that I was allowed to explore.  It was an important beginning for me too, as this was my first encounter with both the Christian and Hebrew Bible.

The caption printed under the image in UCC’s publication read: “I Shall Make a New Covenant”.   That meant something very different to me when I painted this image two decades ago, than it does now.  My goal as an illustrator was to inspire others to take this idea to heart, by creating an image that gives visual structure to it, energized by color.

What does “covenant” mean to you?  My dictionary defines the word as “a formal, solemn, and binding agreement” or “a written agreement or promise, usually under the seal between two or more parties, especially for the performance of some action”.  For each one of us, that can mean so many things.  I knew my image could not particularize the action, only show potential.  That is how “Beginning Prayer” was born as an egg-like image with very basic human forms.

Many people think of this as a pregnancy image.  It both is and is not.  That central figure is not [only] a mother giving birth to a child, but [also] an individual bringing forth the tender fruit of their own potential.  Yellow flowers add the color of sunshine and hope.  The receiving hands are community – our friends and family, the midwives of our manifestations.  They radiate outward in the direction of unfolding potential, and reach inward through the egg that contains us, from which we must break free.  As that which grows within us is born, so are we reborn.

Mircea Eliade writes:  “Everything is gestation and then bringing forth.  To let each impression and each germ of a feeling come to completion wholly in itself, in the dark, in the inexpressible, the unconscious, beyond the reach of one’s own intelligence, and await with deep humility and patience the birth-hour of a new c larity: that alone is living the artist’s life: in understanding as in creating.”  (Letters to a Young Poet, pp.29-30)

I wish you a fruitful beginning in the New Year!  May this image serve you well, whatever you do.

Order Beginning Prayer as a POSTER this week, and get a free greeting card (of the same image)!   $10 for the poster and card, shipping included.  It will be blank on the inside, so you can use it for any purpose.  I hope you will send the card to someone you care about.  This is my way of spreading my art around – because people who read my posts and like my art are generally people who like receiving a hand-written note in the mail (and a colorful picture).  I like that.

Thanks for your interest in my art!  If you want to be removed from this mailing list, just let me know.  Otherwise, see you next week!

D Yael Bernhard
http://dyaelbernhard.com
Author / Illustrator of
THE JEWISH EYE – 2015 / 5775 calendar of art
NEVER SAY A MEAN WORD AGAIN – A Publisher’s Weekly Starred Review
THE DREIDEL THAT WOULDN’T SPIN – A Toyshop Tale of Hanukkah
WHILE YOU ARE SLEEPING – A Children’s Book Council Notable Book
AROUND THE WORLD IN ONE SHABBAT – A Sydney Taylor Honor Book
GREEN BIBLE STORIES FOR CHILDREN – Nat’l Green Book Festival Notable Book
A RIDE ON MOTHER’S BACK – An American Bookseller Assoc. Pick of the List
– and more!
This entry was posted in Image of the Week and tagged art, Durga Yael Bernhard, illustration, Image of the Week. Bookmark the permalink.