A Perfect Day for a Book

Announcing my new lift-the-flap picture book of time around the world! 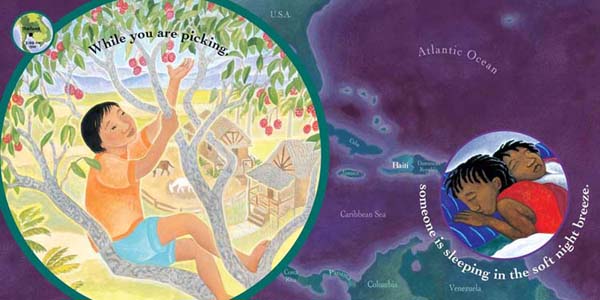 On the morning of Tuesday, January 12th, 2010, I turned on my favorite radio program and sat down to work on one of the illustrations for my forthcoming book: While You Are Sleeping: A Lift-the-Flap Book of Time Around the World (Charlesbridge Publishing). I was painting a nighttime scene of three children sleeping in Haiti. With a collage of photographs up on my computer screen for reference, I carefully assembled a fictitious image based on visual facts.

Like all the scenes in the book, this one features a clock, showing the time of day and an appropriate sky to match. But I want my book to teach about more than just time zones. I want it to convey something about what life is like in other parts of the world – how it is different, and how it is the same. The three Haitian children in this illustration share a tattered mattress on a floor of packed earth. They sleep in their clothes under bare walls and windows without glass. But despite a standard of living which the average reader of my book will never experience, these children have each other, and they sleep peacefully.

Suddenly, a news report interrupted the morning radio program: Haiti had just been hit by a devastating earthquake. I stopped painting, and considered what would happen in an earthquake to a house such as this, built of mud and concrete. That picture would not be so pretty. Clearly, my depiction of Haiti was scarcely grim enough. Yet I’m glad it’s included in the book, among many other scenes showing children engaged in daily activities which may not be familiar to the majority of my readers.

Though none are as tragic as Haiti, every illustration in While You are Sleeping shows something real. A young girl in England rises early to milk a goat before school. A boy in Thailand climbs a lychee tree and picks the ripe fruit for his afternoon snack. A pre-teen in India carries her baby brother to an outdoor public well, where she pumps water by hand and bathes him in an enamel basin. A Nigerian girl carries a bowl of fruit on her head past neighbors grinding millet in a large wooden mortar. While these places have not gained the world attention the earthquake brought to Haiti, they show children the reality of how other people live even in today’s modern world.

The seed idea for While You Are Sleeping had been planted several years earlier while I was signing books at a local elementary school’s “Author Day.” A teacher who stopped to chat made an offhand comment that not one decent book existed for teaching about time zones. Students understood the turning of the earth and the changing of the seasons. But in this era of international travel and instant world news, there was little to teach how time zones work. The idea came to me to show a single moment all over the globe, with a world map at the back of the book showing the placement of each scene in its respective time zone.

But before the time zone map could be resolved, I had to decide on a day. What time of year would the moment take place? My editor, Alyssa Pusey, and I considered. While it is winter in the northern hemisphere, it’s summer in the southern hemisphere. While the sun sets in one place, it rises in another. Some parts of the world are always hot. Fruits ripen in different climates and seasons. Depicting a single moment around the world quickly became a complex jigsaw puzzle of geographic, seasonal, and cultural considerations. There was much more to consider than clocks.

I decided to begin with sunset at the beginning and sunrise at the end of the book. Beginning in Alaska, we moved location dots around the globe like chess pieces, distributing them in as many time zones as possible. I had my heart set on showing cherry blossoms in Japan. That placed the book in spring. But were lychee fruit ripe in Thailand at the same time? Did the sun rise late enough in Brazil for a fisherman and his son to set out at the same time the sky darkened in springtime Alaska? Would nighttime in Mexico City coincide with morning in England? Around and around the world my editor and I went. As our press deadline rapidly approached, Alyssa, despite being eight months pregnant, devoted extra time to the book, and patiently helped research the proper times of “civic twilight” (the period of time before dawn and after dusk when artificial light is no longer/not yet needed), while I combed the Internet for the right shape of houses in Nigeria, fishing huts in Brazil, and where the tree line stops in Alaska. The more we searched, the more we learned . . . and the more the world became a tapestry of interrelationships.

In the end, time and place came together, and March 13th emerged as the perfect day.  On that day, everything shown is both possible and probable. With every element happily tucked in, While You Are Sleeping went off to press, and I went on to begin work on my next picture book.  And a few weeks later, my editor gave birth to a beautiful baby boy – born into a world of stunning diversity, far-reaching time zones – and with a little help from books and teachers, ever-increasing global awareness. 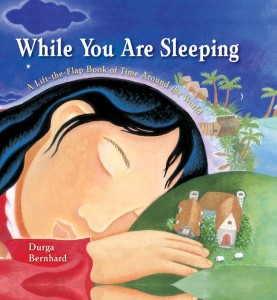 Click on “Purchase Books” above to order this book directly from Amazon.com.  Durga’s new picture book AROUND THE WORLD IN ONE SHABBAT: Jewish People Celebrate the Sabbath (Jewish Lights Publishing, written and illustrated by Durga) will be published this spring; GREEN BIBLE STORIES: Ecology Lessons from the Bible (Kar Ben Publishing, written by Tami Lehman-Wilzig, illustrated by Durga) will be published this fall.  Click on “Forthcoming Books” for more information.

This entry was posted in Children's Books, D Yael Writes About Art and tagged multicultural children's books, time around the world, time zones. Bookmark the permalink.