Chanukah, also known as the Festival of Lights or Feast of Dedication, is a great time to make art with kids.  Bring out the shiny paper and sparkly glitter – and get ready to make a big, happy mess.  That’s what the kids at the Woodstock Jewish Congregation and Temple Emanuel in Kingston, NY, did as they created paper-cut menorahs for Chanukah.  The room was chaotic, full of the sounds of snipping scissors and busy chatter, while paper cuttings flew everywhere, covering the tables and floor like colored snowflakes. 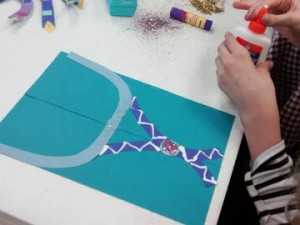 But out of this chaos came some beautiful order.  It happened again:  Jews found even more ways to express the 8-plus-1 structure of a chanukiyah, the classic menorah first used by the Maccabees to rededicate the Second Temple in the second century BCE.

“Menorah” means lamp in Hebrew.  The first menorah was crafted according to the instructions of God, who describes to Moses in detail the design of the seven-branched candelabra: 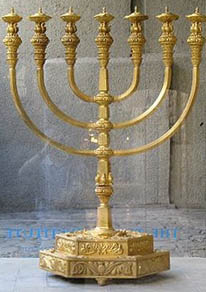 A replica of the menorah of Solomon’s Temple in Jerusalem

“And you shall make a menorah of pure gold. The menorah shall be made of hammered work; its base and its stem, its goblets, its knobs, and its flowers shall [all] be [one piece] with it.”
(Exodus 25:31-32)

The branches of this golden menorah were made to resemble a flowering almond tree – the first tree to flower in the spring in Israel, and a symbol of hope and renewal.   This golden menorah was first used in the Tabernacle, the Tent of Meeting that the ancient Israelites used as a portable sanctuary as they journeyed through the Sinai wilderness.  Later, it became the first ner tamid, or eternal light, that illuminated King Solomon’s Temple in Jerusalem.  The menorah was kindled every afternoon, and remained lit throughout the night.  The lights of the menorah symbolize the illumination provided by Torah and its mitzvot, or commandments  – the candles representing mitzvot, and the light representing the teachings of Torah. 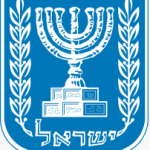 The seven-branched menorah is the earliest symbol of Judaism, and is still used as Israel’s coat of arms today. 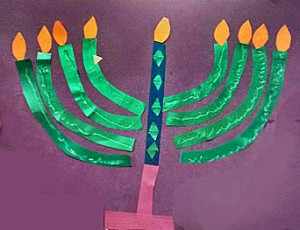 A Chanukah menorah, or chanukiyah, has eight lights instead of seven, commemorating the eight days of illumination that were miraculously sustained by one day’s worth of oil when the Maccabees rededicated the Temple.  Greatly outnumbered, the Maccabees fought bravely to liberate Jerusalem from the Greek invasion that had taken place under the emperor Antiochus.

Thousands of years later in New York’s Hudson Valley, we began our project by looking at some basic menorah shapes.  Would the candleholders be arched or straight?  Symmetrical or asymmetrical?  Even or uneven? 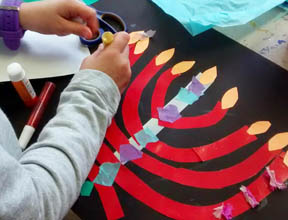 Free from having to worry about structural integrity, the students were given permission to get as fanciful as they wanted.  Starting with a dark base of construction paper, we folded large sheets of colored paper in half.  Then we started cutting.  Whatever we cut came out in duplicate, making symmetrical shapes.  But once the kids realized they could break out of the classic menorah design, they began “branching” out in other directions.  Some crazy designs soon took shape! 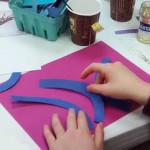 In one class, the kids “drew” in glitter, first by making lines of wet glue, then sprinkling the glitter on top.  I’m sure I will get all the glitter out of my hair by the end of Chanukah.  In the meantime, I’m sparkling with memories of a fun project.

In another class, just for fun we typed “unique menorah” into a search engine, and looked at the results.   Try it!  You will behold menorahs of octopi and bicycles, chess pieces and trucks.  The sky’s the limit when it comes to menorah designs.  Every possible geometry under the sun has been exploited – but there is always room for more.  Each menorah has eight candles and a shamash – the ninth candle that lights, or serves, the others – yet each menorah is unique and different. 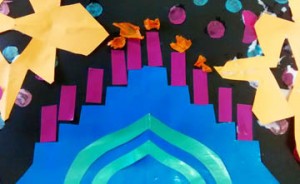 How did the Torah create such liberating parameters?   Never have I seen such creative diversity spring from one form.  8-plus-1 seems to be a rhythm that can be visually played in endless ways.  What a parade of color, shape, and texture!  This was not only a festival of light but a feast for the eye.

At its best, Judaism is the same way:  a liberating structure that helps human creativity and potential thrive.  We are blessed with the precepts that hold us as firmly as the eight branches of a lampstand. 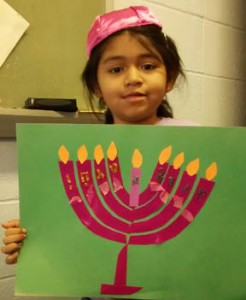 Even if you’re not Jewish or not religious, you will find the basic tenets of the Torah embedded in the roots of our civilization, from the Golden Rule to the freedom proclaimed on our Liberty Bell, from the Bill of Rights to the eternal words of Martin Luther King.

That which bears light must be sturdy and reliable.  And so the Torah is – an eternal light that shines throughout the ages, and a tree of life for those who choose – of their own free will – to embrace it. 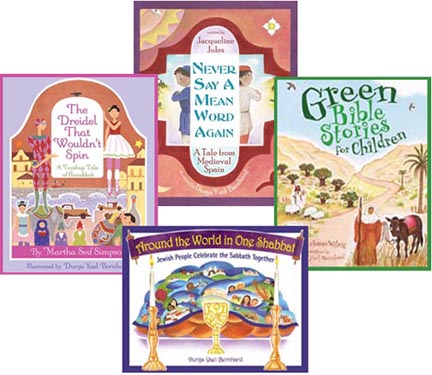